"Woman", the Case Against the Intersectional Definition 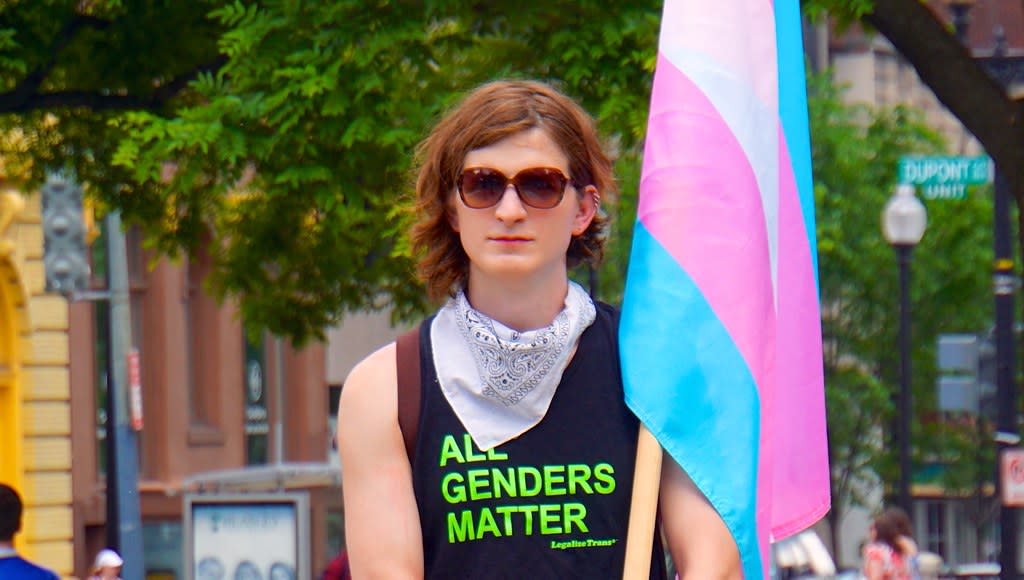 The standard English definition of "woman" is often critiqued by intersectional feminists for being too narrow to fully encompass what they believe the term to mean.

Intersectionalists will derisively point out a distinction between our biological sex, drawn from our physical features, and the social role "woman" is merely a pattern of behaviours and forms of self-expression we use to interact, and so any person performing these behaviours and expressions can therefore also be considered women.

This materialistic view ignores the realisation of "woman" and "womanhood" and attempts to deny it of any essential qualities outside of its social construction. However, outside of its traditional definition, the intersectionalist is generally troubled to provide a workable definition of their own.

It has been my experience that, when challenged, the intersectionalist will give some formulation of the following:

"Woman is defined as someone who identifies as a woman."

This definition has only one requirement and no apparent limit to its scope. It seems tailor-made to allow any thinking creature to be able to adopt the role of "woman", if it were to so choose. As we were told from the 2020 UN Women’s summit on International Women’s Day, women are “limitless and formless”. 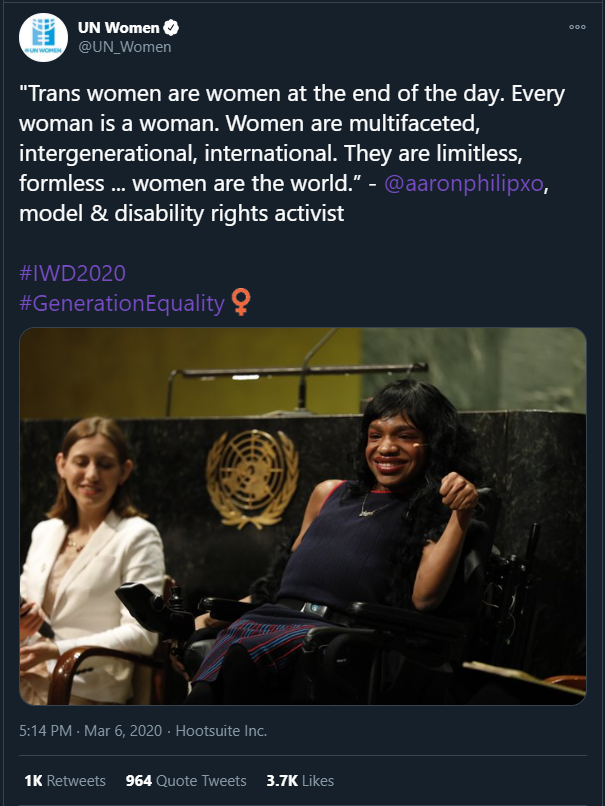 It seems, from a tactical perspective, that this very broad definition has been adopted by intersectionalists in order to facilitate the further acceptance of male-to-female transgender people, so that they will be better-accepted by society in order to protect their physical and mental health.

Nobody wishes to live in a society rife with persecution and abuse, so this is a perfectly noble goal to pursue, however those non-intersectionalists who view these things with a critical eye should be aware of certain problems with this definition that leave open doors to concepts and behaviours that are otherwise unacceptable. Where the intersectionalist criticises the standard definition of woman for being too exclusive, we must object to the intersectional for failing to be exclusive enough.

Not only have we failed to construct a logically or semantically coherent sentence, but we have also emptied the word "woman" of any meaning at all. We would be forced to fall back on a presupposed traditional definition of woman in order to draw from the biological and sociological signifiers that inform our distinction between men and women.

Why would we bother doing this, though? If there is nothing otherwise meant by being a woman, why would anyone identify as one? What is the point of the term, and to whom is it useful? It seems we may well have obliterated the term altogether.

Worse still are certain implications that arise were we to completely abandon the traditional English definition of the word, which is usually:

"A woman is an adult human female."

We do not run into the same semantic or logical issues with such a definition. The intersectionalist objects because this definition excludes people born as males from being considered as women, and is hence detrimental to the interests of transgender males who identify as women, a state of affairs which they would term as “transphobia”

However, a traditionalist definition provides stability and usefulness that the intersectional definition cannot, primarily because it is bound by its biological foundations.

Evolutionary psychologists may tell us that gender roles are social constructs that have emerged from our need to negotiate relationships with one another, in order to fulfill our desire to have children. They therefore have a distinct layer that contains within them a tie to our biological nature that cannot be distinguished neatly from it. The social construct fulfills a biological purpose because humans are social organisms, therefore the definition of “woman” requires a linkage to our essential biological selves in order to be coherent. “Woman” defines a social role for a particular sex, female, and the requirements built into that definition revolve around the biological pressures females face.

The nature of the biological components of the traditional definition are important, too. Though so far I have yet to encounter an intersectionalist who has attempted to argue that a non-human animal could be considered a woman, if “human” is removed from our definition of woman, it is conceivable that, with no other definition of woman to be found, there will be people who wish to include non-humans. This is an issue because women, as we define them, engage in an array of activities that are rightly regulated by society, such as intercourse and marriage, that might otherwise seem permissible.

This leads us on to the final issue with the intersectional definition of “woman”: it does not require the person to be an adult. This is deeply concerning to those people who think that there should be a complete prohibition on sexual interactions between adults and children. It would seem that, if biology is no barrier to becoming a woman, that children could be considered to be women and, as with non-human organisms, could find themselves claiming the status of “woman” and everything that goes along with it.

If to be a woman is to be understood as a sexual being, and anyone can identify as a woman, it would seem that the door is open for people with nefarious intent. If nothing else, it seems simply prudent to define “woman” as a term restricted to adults to prevent such complications regarding the sexual nature of the identity, with the intention of protecting children from any adults who might use this loophole as a method of satisfying their predatory instincts.

This is to make no commentary on transgender people, or to suggest a lack of empathy for their plight, it is to emphasise that, while we might agree that they contain within themselves a contradiction that needs resolution, effectively abolishing the identity of “woman” is a solution that causes more problems than it solves.