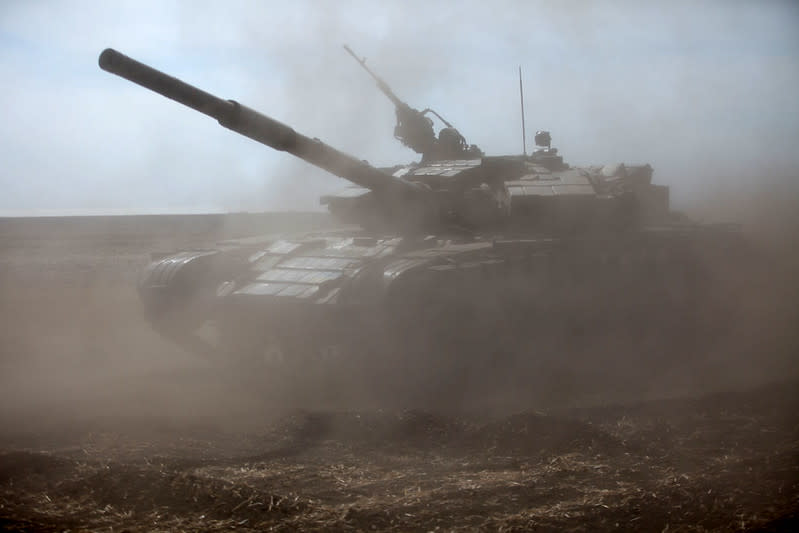 It’s all kicking off in Ukraine, and there are so many things to report on that I’m having difficulty in choosing what to analyse. As a result, I’m going to use a ‘stream of consciousness’ format, noting down my observations from the escalating conflict as they occur in chronological order.

There is so much misinformation, propaganda, and disinformation afloat that it may be hard at times to separate reality from fiction. However, there is also an abundance of reliable footage emerging, primarily from Ukrainian citizens’ smartphones.

Since the history of the conflict will certainly be rewritten by both sides after the event, I’m writing this account not only to summarise the events happening on the ground, but also to record the ever-changing impressions of this conflict as events unfold, from the perspective of an average outside observer.

Due to the time-sensitive nature of this reporting, any mistakes made below are my own.

Yesterday at 05:55 am began the first full-scale industrial war in Europe since World War II. To make that claim, I am discounting the Breakup of Yugoslavia in the 1990s, which was an example of what is called ‘limited warfare’. I am also discounting the Prague Spring of 1968, and the Hungarian Revolution of 1956.

More than these sights, however, the sound of the war is quite remarkable. Bangs and booms, howls and shrieks, flashes of light, plumes of smoke. No wonder many in the Western commentariat appear to be treating this conflict as a glorified fireworks display, put on for their vicarious entertainment cloaked in shallow moral outrage.

We also saw lines of burned-out infantry fighting vehicles (IFVs), and a few tanks and trucks. Sometimes the destruction was obvious, with huge plumes of black smoke pouring from the top of the vehicle; other times the vehicles were simply immobile, as if parked and abandoned by their crew. Occasionally a clip would show the body of a dead soldier stretched out across a road or patch of earth. As the day progressed, it became apparent that the Russians were taking losses around Kharkiv in the east, while an attack from Crimea had secured a swathe of territory stretching north to the Dnieper River. The attack from the north, seemingly via Belarus, was ongoing into the night around the Chernobyl-Pripyat area.

Other significant operations were fought around Ukraine’s airports. Russia claims to have neutralised Ukraine’s air force and air defences on day one, and whether or not this claim is true, they have certainly focused most of their initial strikes against major air facilities. In particular, the fighting around Kyiv International Airport (Hostomel) has been fierce, with a flock of Russian attack helicopters engaged in combat there on day one. Ukraine later launched a counterattack to retake the airport, resulting in heavy fighting, but the result of that operation remains unclear.

Aircraft from both sides have also been downed, including footage of what is believed to be a Russian helicopter ditching over a body of water, and several helicopters struck by MANPAD missiles. Photos of downed Antonov An-26 transport planes also emerged, one of which was Ukrainian and the other Russian. A Ukrainian fighter jet flew to Romania, presumably in an attempt to flee the fighting, but no other large-scale desertions have been reported as yet. According to pre-war estimates of military strength, Russia enjoys an overwhelming superiority in airpower, with approximately 1,000 combat jets compared to Ukraine’s 69.

There was also an operation by the Russian Navy to seize ‘Snake Island’ in the Black Sea; all 13 defenders of this tiny island have apparently been killed and the rock is now in Russian hands.

As night fell it seemed that the Russian attack had stalled in the east, with no further ground advances being made from the north or south. Japanese military analysts noted that the Russian army’s advance was “much faster than anticipated,” although Western observers downplay this, claiming that day one of the Russian offensive was “a disappointment for Putin” suffering more casualties and claiming less ground than the Russians expected. The veracity of either claim is hard to ascertain, as is the claim by the UK’s Defence Minister that Russia suffered 450 military casualties on its first day of fighting compared to over 130 killed for Ukraine. However, reports indicate that Russia had committed only a fraction of its ground forces, with some 30,000 tanks still on standby. Putin reiterated his demands for a Ukrainian surrender last night.