A prominent newspaper columnist has been sacked by The Telegraph after she suggested that Meghan and Harry should have named their baby after George Floyd. 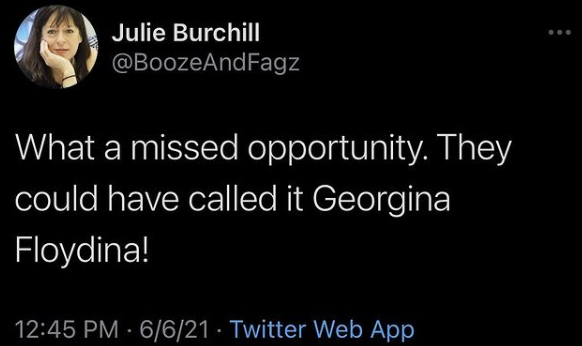 Julie Burchill, who announced on Tuesday that she had been sacked by the paper, asserted that her five-year career had been “lovely” despite her lamentations around the company’s frequent “rejection of [her] edgy column ideas” in favour of “more pedestrian ones.”

The Telegraph, Sunday Times and Guardian writer was lambasted after a facetious tweet on Sunday joked that the Duke and Duchess of Sussex should have named their newborn after George Floyd, a black Minneapolis man who died while being restrained by police in May 2020.

The royal editor for the magazine Harper's Bazaar and personal friend of the Sussex’s, Omid Scobie, commented on Burchill’s suggestion and noted her swift ban from Twitter. He also challenged Telegraph editor Chris Evans to comment.

“The fact that credible outlets still employ this individual speaks volumes about the state of our media landscape. Twitter wasted no time. Would be interested to hear your thoughts on the matter, @chrisevans1 @Telegraph.”

Later, Scobie said that a Telegraph spokesperson had confirmed that Burchill had been dropped as a contributor for the paper.

“A source confirms that she was fired following her racist tweets about the Sussexes' second child (and refusal to apologise for them).”

Writing on Facebook, Julie Burchill thanked the Telegraph for helping her “out of [her] wilderness years” before stating: “onwards and upwards!”