New findings detailed in an open letter to the Home Office - the UK Government’s ministerial department for immigration, security, and law and order - show preferential treatment of non-white identity groups in its representation of hate crime figures. Among other consequences, this data manipulation serves to help the UK’s notorious grooming gangs.

Written by a medical doctor and Rotherham grooming gang survivor Dr Ella Hill, the letter addresses the UK Home Office and outlines a series of “discriminatory practices” in the department’s reporting of Hate Crime figures. Namely, the letter accuses the Home Office of deliberately choosing misleading methods of data presentation in order to downplay the suffering of white victims - emphasising fractional weightings as opposed to overall percentage data and omitting figures for hate crime victims under the age of 16.

In England and Wales, a hate crime is currently defined as “any criminal offence which is perceived, by the victim or any other person, to be motivated by hostility or prejudice towards someone based on a personal characteristic such as race or ethnicity, religion or beliefs, sexual orientation, disability, and transgender identity.”

Through the interpolation of the data outlined in the 2011 ethnicity census and several Home Office Hate Crime reports, Dr Hill’s findings suggest an effective cover-up of grooming gang crime over a 15-year period. Citing a House of Commons Hate Crime Briefing paper from December 2020, the letter notes a trend within Home Office hate crime reporting of making false comparisons between hate crime weightings for white people (0.1%) and the ‘other ethnic’ group (1.1%). 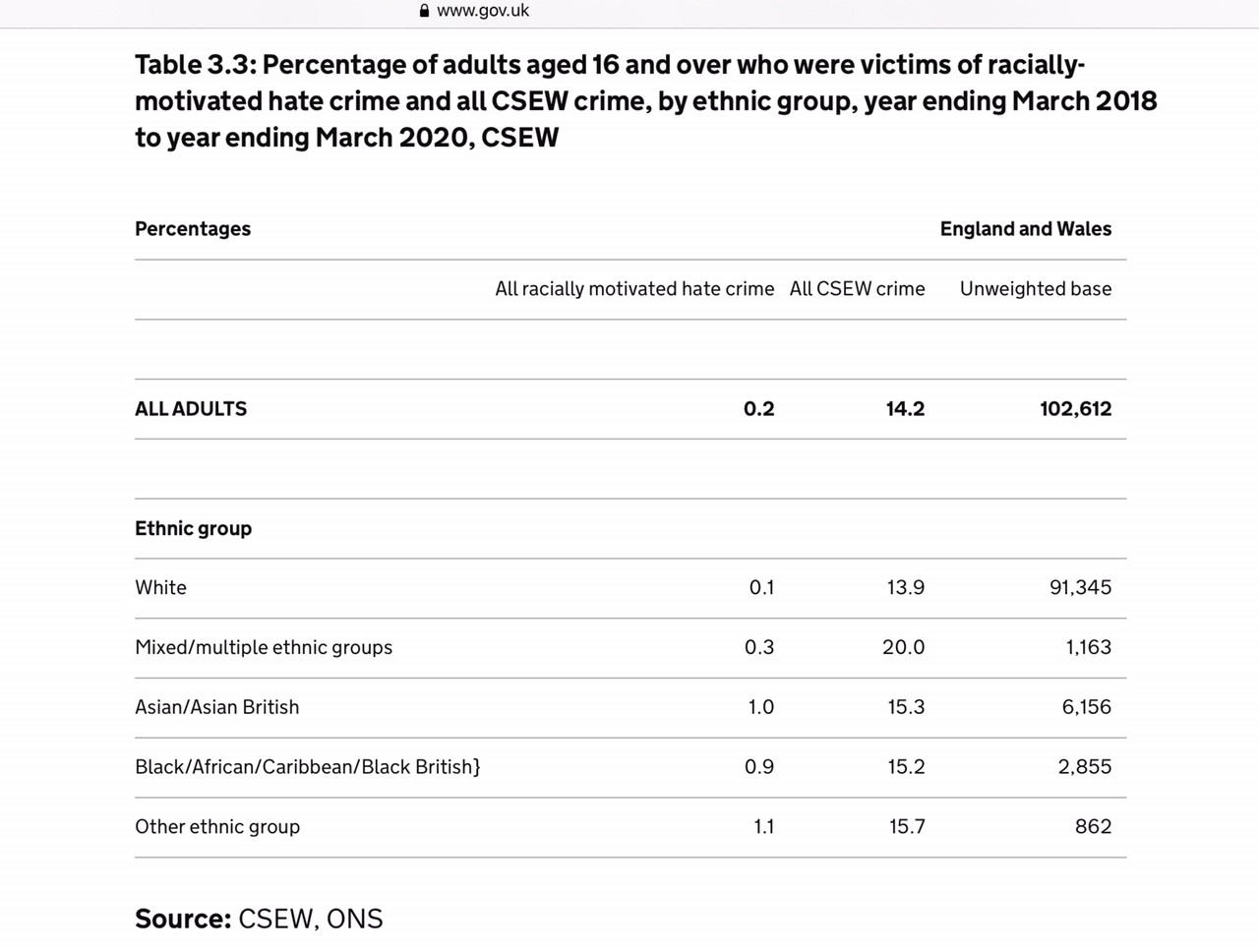 This, Dr Hill asserts, is an “attempt to deceive people into thinking that non-white people are more likely to be victims of racially motivated hate crime,” where the correct comparison should be made between white people and all other (non-white) ethnic groups (0.9%). When compared with the 2011 Census population data, the fractional weightings show that the largest proportion of racially motivated hate crimes in England and Wales are anti-white hate crimes at 41% - a figure omitted from the report entirely. 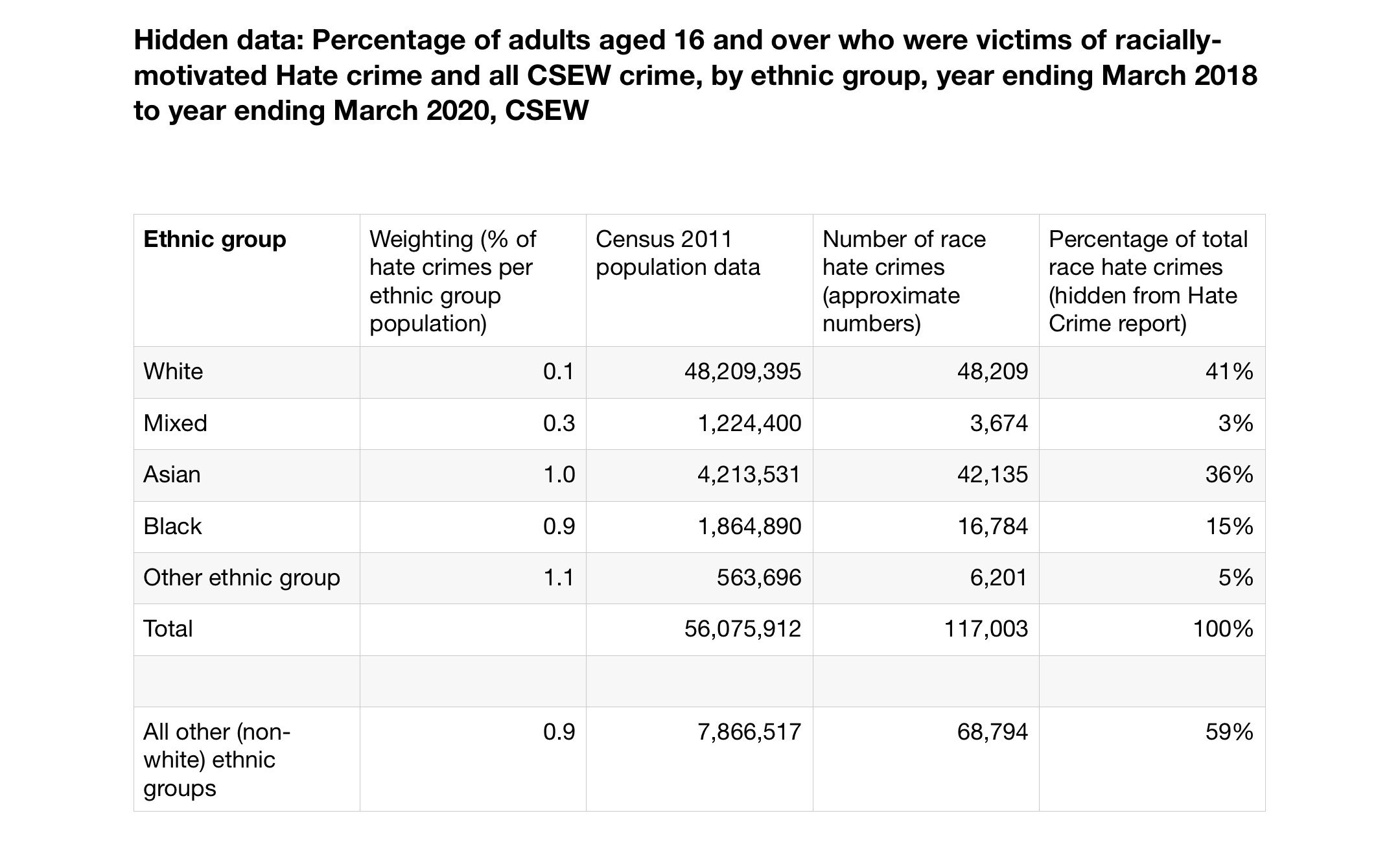 The Hate Crime report's omission of data, as noted by Dr Hill, has been accompanied by the “cherry-picking” of data from areas with a high black ethnic population where there is “proportionally more anti-black hate crime (30%) compared to the national average of 15%,” an effective “skewing” of the data, done to “deceive readers into thinking that anti-white hate crime is a much smaller problem nationally.”

The letter also notes the Hate Crime report’s lack of distinct categories for hate crimes made against persons for their “lack of religion” or “lack of religious belief,” a facet which Dr Hill asserts as “clear religious discrimination” against the non-religious, including grooming gang victims. Furthermore, by emphasising the “overall proportion of recorded hate crimes against people perceived to be Muslim” (50%), the open letter noted the report’s “effect of disproportionately inflating the suffering of Muslim hate crime victims” through the implied false statistical comparison. Indeed, the given weighting of anti-Muslim hate crimes is equal to the given weighting as anti-White hate crimes, a comparison again omitted from the report. 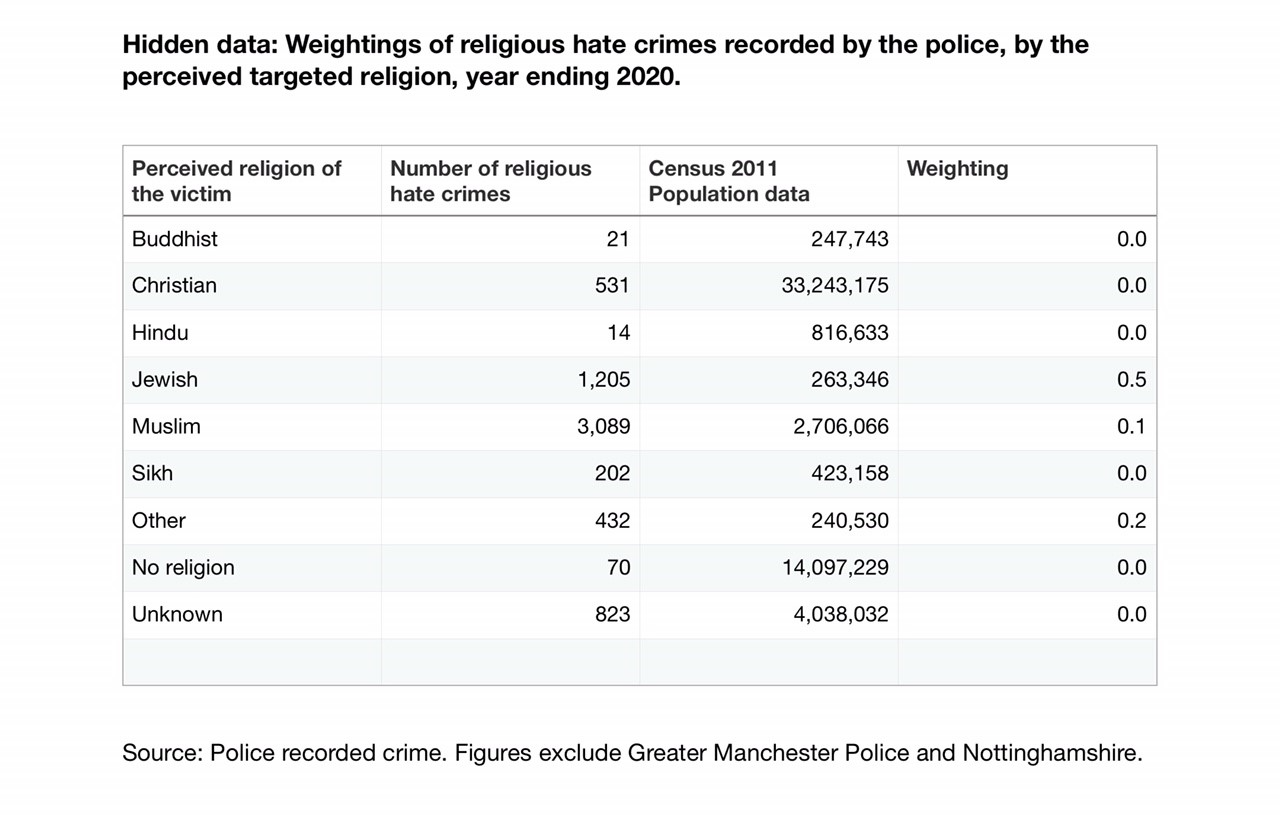 Notably, the Home Office report shows that the data for anti-Muslim terrorist attacks such as the 2017 Finsbury Park Mosque attack is included in hate crime statistics whereas religiously aggravated Islamist attacks against those perceived to be non-Muslim, such as the Manchester Arena Bombing, was not.

“Terrorist offences may also be considered a hate crime and the College of Policing operational guidance states there is a ‘clear overlap between hate crime and terrorist activity.’ Some terrorist attacks may be targeted against general British or Western values rather than one of the five specific strands. Attacks of this nature are therefore not covered by this statistical bulletin, although they will clearly be motivated by hate.”

In regards to sexual assault statistics, Dr Hill noted that the report classified only 0.2% of prosecuted hate crimes as sexual assaults:

“[This] confirms what we have been told. Police and CPS have not been trained to record and prosecute sexual assaults as racially/religiously aggravated offences, whilst they have been actively encouraged to prosecute public disorder offences, and online communications as racially and religiously aggravated offences. When multiple sexual offences are prosecuted as racially aggravated, they are often only charged as one single rape. So 100 rapes count the same as one hate speech hate crime. This is unfair.”

Ultimately, the open letter accused the Home Office of a “deliberate institutional cover-up of grooming gang crime” through a variety of “discriminatory, unfair and unlawful” practices. Proceeding, Dr Hill condemned the Home Office’s Hate Crime reports as a “biased and discriminatory” form of left-wing propaganda, asserting that “Britain has more anti-white hate crime than any other type of race hate crime.”