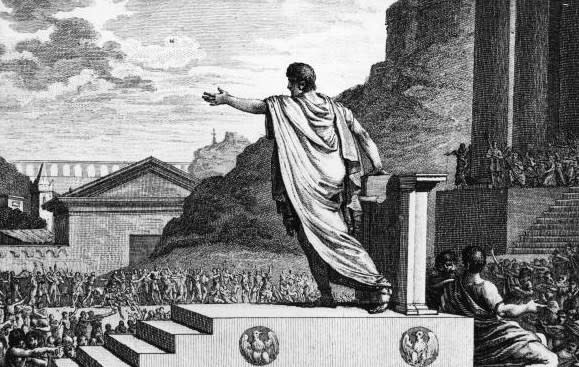 What if I told you that the political situation, as it is unfolding in the United States, has happened before - in another time and place? What if I told you that it has, in fact, happened a great many times before, all over the world, and in shockingly similar circumstances? It is playing out with eerily familiar tones, almost as though the actors themselves have little agency left and the merciless and invisible hand of history is now holding the reigns and cracking the whip independently of any further human intervention.

The obvious and clichéd line to trot out is that of Mark Twain: “History doesn’t repeat itself, but it often rhymes.” I’d go a little further; I’d say it more than rhymes, it periodically produces cover versions of its own greatest hits. This little song, the death of a large and prosperous republic due to internal strife, has played out multiple times, and it seems as though our generation is going to be treated to its very own rendition.

Allow me to tell you a story. The story of a rich kid who entered politics as a populist, entered office against the odds using a touch of strong rhetoric, tried to reform the establishment on behalf of the greater good of the people, but was demonised, hounded, and eventually destroyed by an entrenched and vicious deep state that simply could not abide.

A long time ago, in a republic far, far away (from Washington) there once was a man named Tiberius Gracchus. This Tiberius Gracchus lived in a time before Caesar and Augustus, before Marius and Sulla, before the near-endless succession of military rulers of Rome, in a time when the mechanisms of republican government were firmly established and seemed to function well. For centuries the popular assembly and the senate had conducted their business, with the occasional veto from the tribunes of the people, and had enjoyed a period of phenomenal growth in every possible metric.

Perhaps that growth was too prolific, some historians have noted, for Rome’s system of government began to creak under the weight of its newly acquired wealth and power. The scope for corruption increased and so too did the opportunity for cartels and cabals to develop, most notably in the realm of land distribution. In Tiberius Gracchus’ lifetime, the most pressing issue was that the common Roman had been largely dispossessed by monopolistic senatorial landholders who refused to allow legal reform to redress the concerns of the average smallholder and had replaced their labour with newly acquired foreign slaves.

Tiberius was a fair-minded and noble soul, the ancient historian Plutarch tells us, and felt compelled to tackle this issue when he gained the hitherto relatively junior office of Tribune. This venerable and sacrosanct position held a power to veto any decision of the government on behalf of the people, in order to avoid their complete political negation. But its powers had fallen into disuse and were not expected to be exercised to their full capacity; until Tiberius Gracchus.

Gracchus used the powers of his office to legally block the ruling elites, the senatorial class, from expanding and cementing their cartels. He proposed legislation that would, in fact, benefit the broad citizenry, and when immensely powerful political interests arrayed against him, he attempted to legally frustrate them and block their path.

The parallels with Trump are striking. Perhaps not Trump the man, as I think he and Tiberius Gracchus have very little personality in common. But in their political journeys. Both men entered the fray, the political maelstrom, as outsiders. Both thumbed their nose at the ruling establishment, setting themselves up firmly on the side of populism. Tiberius Gracchus was very much attempting to drain Rome’s swamp. Both men were accused of wanting to be a king, and despite a groundswell of popular support, they were also met with a wall of hostility from a deep state committed at all costs to remove them from office.

It is perhaps in the ending of Tiberius Gracchus’ journey that the most salient parallels and lessons can be drawn. For as it became clear that Tiberius and his faction were hell-bent on a programme of reform, come what may, the senators and their retainers resorted to force. They simply gathered a mob, over-powered their opponents in a naked display of desperation, and clubbed Tiberius to death before throwing the resulting sack of bones into the river Tiber.

Trump can probably expect a less violent cancellation, retiring to Mar-a-Lago and endless rounds of golf, I imagine. But the spirit with which he and Tiberius Gracchus were thwarted are exactly the same. The spirit of contempt for populist sentiment among an entrenched ruling class. The near-hysterical need to silence and baffle the authentic voice of a long-ignored underclass. A type of political and social revenge whose repercussions far outlast the careers of anyone involved at the time. A spirit of malevolence which is sure to bring in its wake yet further cycles of resentment and reaction.

What happened next in the great story of Rome’s republic may serve as a vague guide to how things might pan out in the United States over the next few presidential races. In Rome’s case, the Gracchi family were not finished in their attempt to champion the grievances of the exploited and ignored. All good Roman history nerds will be well aware that Tiberius had a little brother, Gaius, who subsequently, and at first reluctantly, took up the cause.

Young Gaius proved to be more irascible and more easily prone to demagoguery than his older sibling, and he paid for it in a very similar fashion - bashed to a pulp and chucked in the Tiber along with thousands of his supporters.

I wonder who will live out the role of a modern-day American Gaius Gracchus. Giuliani? Tucker? Not Palin, surely? ... Whoever it is, they will be facing incredible odds.

Yet the forces unleashed by the Gracchi could never be contained again. Their arguments could not be unsaid, could not be unheard. Their political journeys were short, yet they set the stage for hundreds of years. They set in motion a series of events which killed the republic and ushered in an age of military rule. Their little corner of history echoes through the ages, like a beacon of forewarning, screaming out to anyone who will listen: ‘Remember, remember the Gracchi!”

B.B. Dade is a history fan with a mic. He holds degrees in Ancient History and in Government, Policy and Politics. With a background in asset management and private banking, he is currently working for a commodities trading firm. Follow him on YouTube.