Rachel Levine Sworn In as US Four-Star Admiral 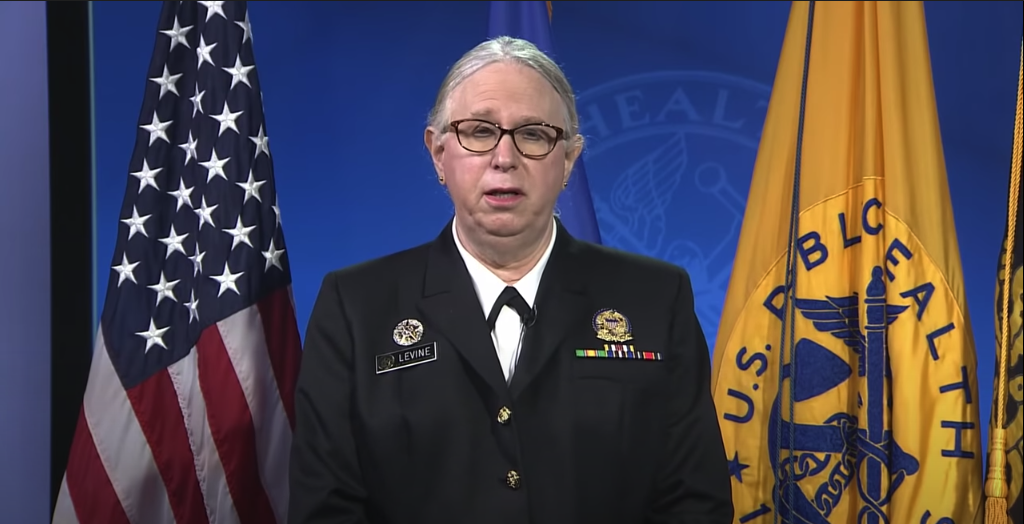 The United States Assistant Secretary for Health Dr Rachel Levine has been sworn in as a four-star admiral of the US Public Health Service Commissioned Corps.

Dr Levine’s commission to the rank, which was appointed by President Joe Biden, makes the 63-year-old the highest-ranking openly transgender official in the US, and the first transgender four-star officer in the history of the country’s eight uniformed services.

Speaking after being sworn in as a four-star general, Levine, who will now lead 6,000 commissioned public health service officers, described the occasion as “momentous” and “historic.”

“I am truly honoured to join the ranks of men and women across this great nation who have committed to defend the United States against small and large threats, known and unknown … My father often spoke about his service in the Air Force during World War Two. A young man from a small town in Massachusetts, stepping up to answer the call, to serve in Africa and in Italy as a Jewish American … Just as [he] stepped up to defend our rights and freedoms, I now follow in the storied tradition of service as I step up to defend the health of our nation - especially now as we face the biggest public health crisis our country and the world has faced in modern times … I stand on the shoulders of those LGBTQ+ individuals who came before me, both those known and unknown. May this appointment today become the first of many more to come as we create a diverse and more inclusive future. Diversity makes us stronger.”

As the state secretary of health for the state of Pennsylvania during the COVID-19 pandemic, Levine, a graduate of Harvard and the Tulane University School of Medicine, faced intense scrutiny for ordering the readmission of elderly Covid hospital patients to nursing homes in an action which critics said led to the deaths of “approximately 2,500 [Pennsylvanian] citizens.”

In a statement, the US Department of Health and Human Services (HHS) commemorated Levine’s appointment and said that the “historic announcement builds on the accomplishments of LGBTQ+ History Month and is a major step forward as we work to create a more inclusive society.”

“Admiral Levine’s historic appointment as the first openly transgender four-star officer is a giant step forward towards equality as a nation,” said HHS Secretary Xavier Becerra. “This is a proud moment for us at HHS. Admiral Levine, a highly accomplished paediatrician who helps drive our agency’s agenda to boost health access and equity and to strengthen behavioural health, is a cherished and critical partner in our work to build a healthier America.”