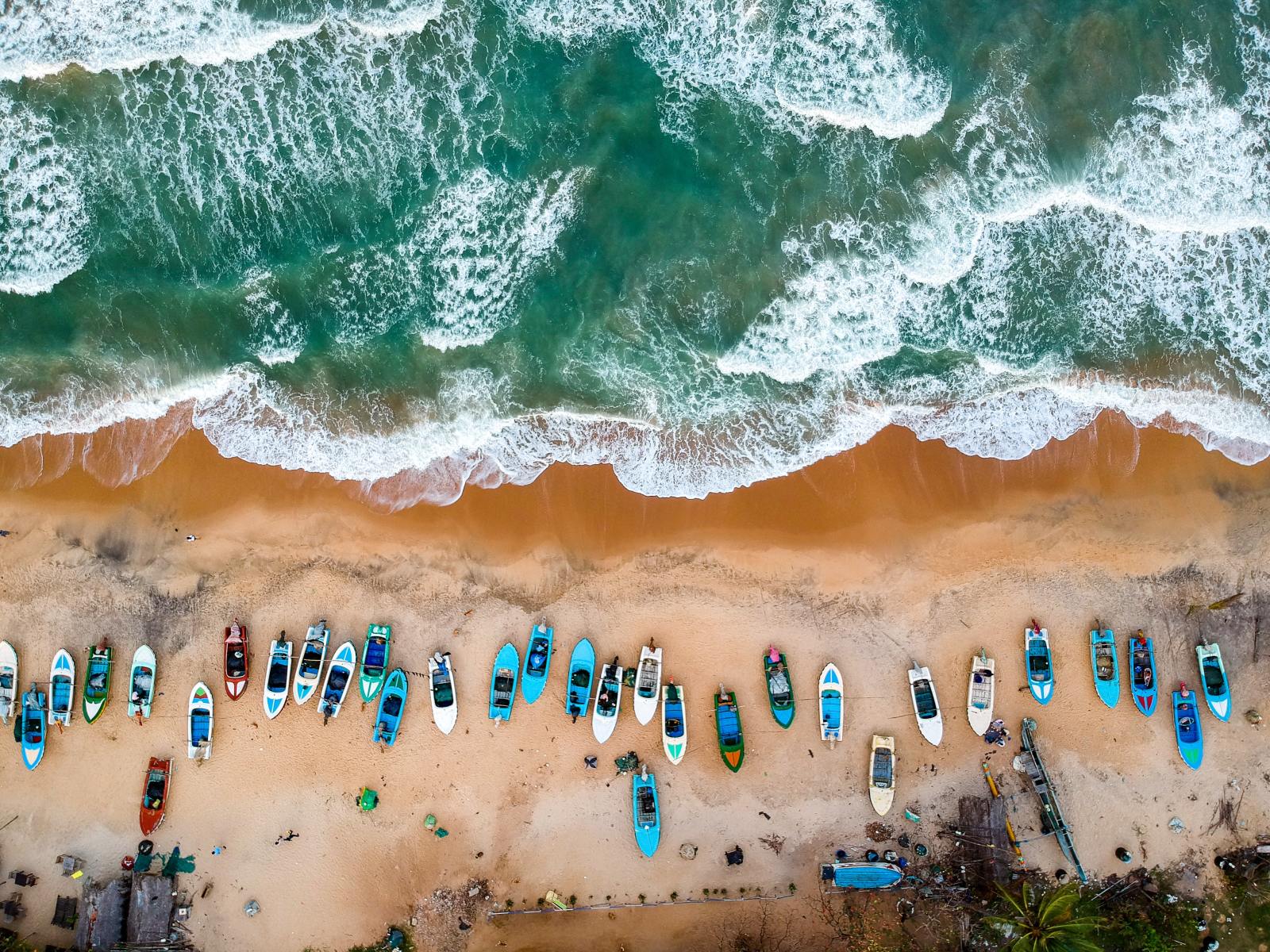 The auto rickshaw is a common sight in Sri Lanka. Also known as the tuk-tuk, they are to the island what the black cab is to London. The three-wheeled motorised vehicles are cheap to run and provide a good source of income for the million or so private riders. In order to entice foreigners, owners often customise their tuk-tuks with bright colours. Bereft of doors, the vehicle’s open space allows you to view the passing surroundings with the wind flowing through your hair. When not stuck on a heavily congested road, they provide quick and easy transportation for both free-spirited tourists and the island’s 22 million inhabitants.

Yet scenes like this are no more. Travel to Sri Lanka now and you're more likely to see the country's tuk-tuk drivers stuck in endless queues for petrol. In Colombo, Sri Lanka’s largest city, drivers have reportedly waited for days in lines as long as two kilometres, and with an average daytime temperature of 30 degrees celsius, a number of people have died from heat exhaustion.

Today, Sri Lanka is facing its worst crisis since its independence from the United Kingdom in 1948. Since October 20, 2021, fuel prices have risen by 259 per cent and amid power blackouts and shortages of everything from fuel to cooking oil to food, Sri Lankans have finally had enough. Mass unrest and violent clashes with the police are now common.

The country’s severe economic crisis is the direct responsibility of President Gotabaya Rajapaksa. Allegations of nepotism were rife after he installed his elder brother Mahinda as Prime Minister. Since March, protesters have taken to the streets demanding the resignation of the Rajapaksa-led government. In May, Mahinda resigned as prime minister. During a tumultuous weekend in July, thousands of anti-government protesters gathered in the capital city of Colombo, where they breached police barricades and occupied the ceremonial presidential palace. Meanwhile, the home of the current—and former six-time—prime minister, Ranil Wickremesinghe, was burned to the ground. Wickremesinghe has since been elected President, and Rajapaksa has fled to the Maldives. The 73-year-old’s departure marks the end of one of the most powerful political dynasties in South Asia.

Sri Lanka is no stranger to tragedy. Thanks to the island’s shape and relative proximity to India, it is commonly referred to as the “teardrop of India.” But behind this pathetic fallacy lies a somewhat cruel irony. A tragic series of disasters is a more likely reason for this romantic-sounding sobriquet. The protracted civil war fought with Tamil separatists has cost upwards of a hundred thousand lives. On Boxing Day 2004, its eastern coastline was hit by a tsunami, killing tens of thousands more. Then came the 2019 Easter bombings carried out by Islamic terrorists, claiming 269 lives. Yet the country’s current decline is a disaster that could have been avoided. What is happening in Sri Lanka now is the result of a potent combination of ideological naivety, technocratic hubris, and political short-sightedness.

In recent months, the country defaulted on $51 billion (£42 billion) of foreign debt and has now run out of foreign reserves. As such, it can no longer import basic necessities such as food, fuel, and medicine. The central bank stepped in, fired up the printing presses, and began rapidly increasing the money supply. The end result is runaway inflation, which currently clocks at around 50 per cent. Meanwhile, food inflation has hit an all-time high of 80 per cent.

When COVID hit, it decimated Sri Lanka’s tourism trade. But the government’s insistence on a Beijing-esque “zero-covid” policy meant that the country stayed closed even as other countries in the region, such as the Maldives, reopened. With tourism accounting for half the nation’s foreign exchange, they could no longer pay the debt held by foreign governments and private bondholders.

But the economic turmoil that has brought Sri Lanka to its knees was precipitated by a terrible decision. It was to undergo an agricultural transformation. Sri Lanka was to become the first country in history to commit wholesale to organic farming.

In 2019, Rajapaksa swept to victory on the back of an election campaign where he promised to transition to organic agriculture over a ten-year period. But as history shows, ambitious agricultural plans tend to always end in disaster. In Stalin’s case, millions died. Rajapaksa championed a movement known as Viyathmaga. Its mission is to harness the “nascent potential of professionals, academics, and entrepreneurs to effectively influence Sri Lanka’s moral and material development; social engineering, Sri Lanka style.

Once president, Rajapaksa appointed members of Viyathmaga to his cabinet, and one as his minister of agriculture. The ministry created a bureaucratic sub-division of committees to advise on the implementation of its progressive environmental mantra. Rajapaksa shut out a lot of the nation's foremost agricultural scientists and agronomists, instead opting to rely on organic experts and academics specialising in alternative agriculture. One ‘expert’ even promoted a scare story that there was a link between artificial fertilisers and chronic kidney disease.

So, against the advice of the country’s agricultural scientists, who had warned that an attempt to go organic would be an unmitigated disaster, last spring Rajapaksa banned the importation of artificial fertilisers. The nation’s two million farmers were to be its patients.

Contrary to the claims that organic farming produces comparable yields to traditional farming, the ban on artificial fertilisers was catastrophic. Following decades of self-sufficiency in rice, average crop yields fell by 30 per cent. Sri Lanka was forced to spend $450 million to import enough to meet demand after the price of this essential carbohydrate increased by 50 per cent. The ban also wreaked havoc on the production of tea, the country’s primary export. The 18 per cent drop in production was estimated to have cost $425 million, further damaging the country’s foreign exchange reserves.

In the years building up to Rajapaksa’s enlightened environmental edict, Sri Lanka had been subsidising farmers to use synthetic fertiliser. Beginning in the early days of the Green Revolution of the 1960s, the results were remarkable. Crop yields more than doubled. The country became food secure while a strong export market helped shore up its foreign reserves. As a vast swathe of the nation's labour force moved into the wage economy, the country achieved upper-middle-income status in 2020. Half a million have now fallen back into poverty.

The economic and political upheaval occurring in Sri Lanka, coupled with the frenzied push towards an agricultural revolution, should serve as a cautionary tale for transitioning to organic farming. Thus, it should come as no surprise that the EU adopts this utopian vision. It introduced a policy requiring member states to make at least a quarter of their farmland organic a few years ago.

The United Kingdom has been losing food self-sufficiency for decades. Forty years ago, 78 per cent of food was produced domestically. This figure has now reached 54 per cent. Amid a cost of living crisis and the war in Ukraine disrupting the global supply chain, it is imperative that we do everything to increase production. The iron law of supply and demand will respond and prices will fall.

It was thus refreshing to learn that the Conservative government has now decided to do something conservative. It has implemented a prudent and practical agricultural policy. The ‘Grow for Britain’ strategy aims to deregulate existing planning rules, making it easier to convert land into farms in an effort to make us less reliant on imported food. It goes against another agricultural policy, DEFRA’s Landscape Recovery Programme’. Known colloquially as “rewilding,” the programme aims to reclaim 300,000 hectares of farmland in order to increase ‘biodiversity’ and reduce carbon emissions.

With roughly 10 billion people set to inhabit the planet by 2050, we must find ways to feed everyone. If we are going to refute the misanthropic Malthusians, the first thing we need to do is develop more land for farming. Yet, as I have shown with the case study of Sri Lanka, when you’re captured by progressive environmental ideology, human progress slows down.

When it comes to organic farming, the reduced yields pose some serious questions for advocates of sustainable agriculture. If we force farmers to produce food bereft of synthetic fertilisers and man-made pesticides, then consumers will face higher prices. If more affluent citizens are prepared to pay more in the absurd belief that organic is better or healthier, that is their prerogative. But if you want to continue eating your smashed toast, don't complain if the supermarket has run out of avocados.

The idea that the state can force an environmental nirvana upon its supposedly ill-educated and misinformed citizenry was best challenged by Rohan Thilak Gurusinghe, a local Sri Lankan farmer. “We told the government a sudden ban on fertilisers would destroy our income but no one listened to us, even less the president who knows nothing about agriculture. Appearing to take aim at the managerial elites ruining his country, the tea farmer from Kandy told Al Jazeera broadcaster: “My country is very beautiful, but politicians destroy it.”