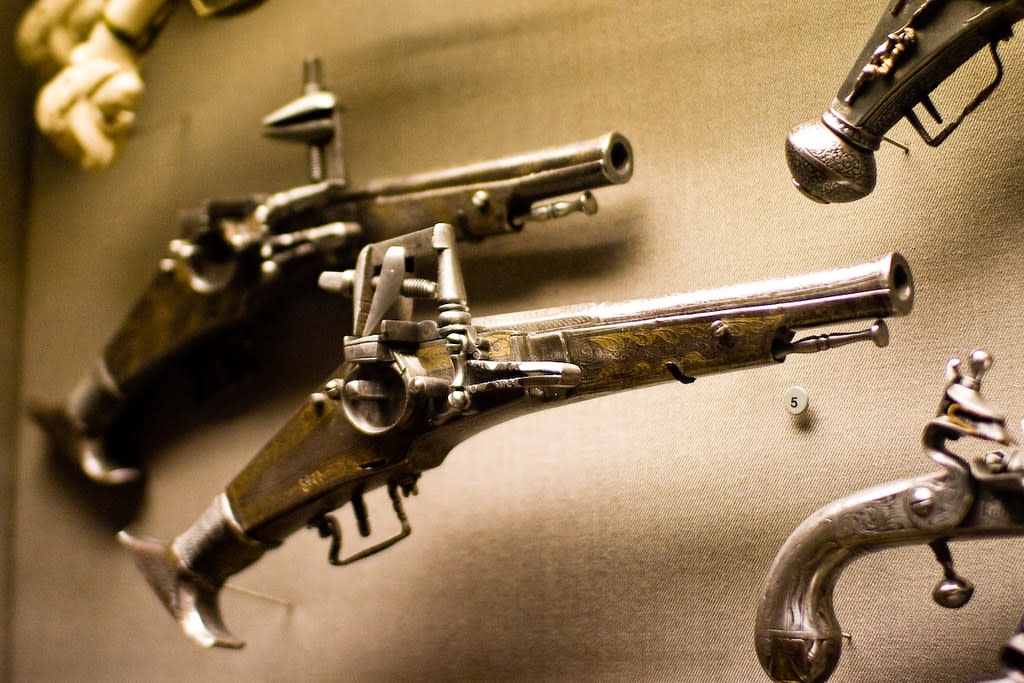 The second amendment to the constitution of the US says: “...the right of the people to keep and bear Arms shall not be infringed.”

The Sabika Sheikh Firearm Licensing and Registration Act, currently making its way through the House Judiciary Committee, says “It shall be unlawful for a person to possess a firearm or ammunition, unless … the person is carrying a valid license”, gives their personal information to a public registry, and pays an $800 per year “insurance” fee to the Attorney General’s office.

Expanding on the summary above, the proposed bill includes numerous additional restrictions on gun ownership as well as many details of the processes associated with those restrictions.

The database would include the type of firearm, the identity of the owner, the date of acquisition, the location of storage, and identity of anyone borrowing the firearm. It would be publicly accessible by anyone.

In order to obtain a license to own a gun or ammunition, an individual would need to undergo a background check, a psychological evaluation including interviews with family member or ex-partners, complete a certified 24-hour-long training course, and pay an “insurance” fee of $800 per year.

Possession of a firearm without said license would carry a punishment of $75,000 to $150,000, 15 to 25 years in prison, or both. Similarly, punitive penalties would be imposed for related breaches under the bill, such as the sale of a firearm to a person without a license, giving a firearm to a minor, or not having the “insurance” policy while holding a license.

Those holding a firearm license would need to renew it every year for the first five years, and every three years after that. Each request for renewal would require the completion of at least 8 hours of firearm training in the two years prior to the request.

These provisions would apply on the federal level, regardless of existing state law in place across different parts of the US.

However, the attempts to enact some form of tighter gun control at the federal level are not the only things in motion in the gun-rights world at the present. Some states are moving in the opposite direction. For example, a legislative committee hearing is being held on the day of writing in Indiana on a “bill that would remove the need for a handgun permit” in the state. Even more commotion can be seen on the local (county) level. Across the US, there has been an “explosion” of “jurisdictions declaring themselves as firearm or Second Amendment sanctuaries”. According to Gun Rights Watch,

“a Second Amendment sanctuary resolution is a peaceful redress of grievances by the political entity closest to the citizens. They typically announce the specific legislation they believe is unconstitutional or bad public policy … The more thorough proposals include perceived violations of state Constitutions as well as that of the United States.”

For example, in the final months of 2019, sweeping changes were enacted in Virginia, as almost all counties passed resolutions reaffirming their commitments to the “right to keep and bear arms”. This is despite Virginia being among states without “Constitutional Carry” (defined as the state-constitutional right to possess or carry a firearm without a permit). Another example of this is Illinois, where a similar development has been underway. Over 2018 and 2019, almost all counties have become second amendment sanctuaries to some extent.

Despite federal gun control legislation being proposed, the long-term trend across the US goes in the opposite direction. As the “Right to Carry” timeline covering the extent of gun restrictions across US states since 1986 shows, most states have gone from not issuing any permits for gun carry at all or a “[state] may issue [a permit]” wording of licensing laws in the 1980s to a “[state] shall issue [a permit]” wording or no license requirement at the present.

In 1986, only Vermont allowed unrestricted carry of firearms, and eight other states featured a “shall issue” formulation of their carry permit laws. By contrast, the right to carry was unrestricted by state law in 16 states in 2019 and 26 more states had moved to “shall issue”. Only eight states had a “may issue” formulation on the books in 2019, and, notably, no state had been left without issuing any firearm carry permits anymore since 2013.

In 2008, the US Supreme Court famously took a stronger position on gun rights than before, reaffirming the application of the second amendment not only to organized militias but to individuals as well. As explained by Reason, In the District of Columbia v. Heller, the prefatory clause in the second amendment - “A well regulated Militia, being necessary to the security of a free State,” - was interpreted as providing just one of the justifications for the right to bear arms, rather than the only one. In the view of Justice Scalia, the reverse would essentially nullify the operative clause - “the right of the people to keep and bear Arms shall not be infringed.” - which would not be consistent with the meaning of similar language used elsewhere across the Bill of Rights.

With such a significant recent change in how the provision in the Bill of Rights is interpreted, it might be likely the Supreme Court would aim to strike down the Sabika Sheikh Firearm Licensing and Registration Act as unconstitutional, were it to pass the legislature and President Biden’s desk.

In a hypothetical situation where the bill was passed and not challenged by the Supreme Court, it is still unlikely that the federal government would be able to enforce it upon unwilling states, localities, and communities. As other recent developments in state governments show, it might be difficult for the federal government under Biden to successfully negotiate the implementation of many of its priorities. The idea of (state) nullification of (federal) laws had been gaining significant traction during the years of the Obama administration. According to ammo.com: “By the end of his eight-year term, 22 states had 50 bills pushing back against encroachments on the Second Amendment and governors signed five bills into law taking on federal gun control.” During Trump’s reign, those nullification movements were somewhat muted, with the extent of the efforts across the US shrinking by “more than half”.

There are signs that after Trump’s exit from the White House, some states are on the move to revive their pushback against Washington. In South Dakota, a bill has been drafted to nullify executive orders signed by Biden which are deemed to be unconstitutional. The Independent reports that “nearly any executive order would be ripe for review under the law, which says it applies to directives about ‘a pandemic or other public health emergency,’ as well as gun rights and ‘regulation of the financial sector through the imposition of environmental, social, or governance standards.’”

Similarly, both houses of the Missouri legislature have recently voted in favour of the ‘Second Amendment Preservation Act’ which would “declare ‘null and void’ any past, present or future federal law deemed to be an infringement on gun rights for law-abiding citizens.” It features the possibility of Missouri residents filing lawsuits against federal agents enforcing laws which go against the second amendment. The most significant effect this bill, if enacted, is likely to have, is to prevent forces funded by the state to assist with the enforcement of federal gun control laws - similarly to how many of the aforementioned second amendment sanctuaries operate.

In a situation where a significant portion of the US is moving in unison against existing gun control measures, and where many jurisdictions are openly expressing their unwillingness to cooperate with, and eagerness to obstruct, the efforts of the federal government, any change in the opposite direction is unlikely. Despite the broadly-anti-gun-rights Democratic party narrowly controlling both the House and the Senate, the Congress is not in a political position favourable enough to be successful with such sweeping movements against the expressed interests of large portions of the federal government’s constitutive entities - states and localities.