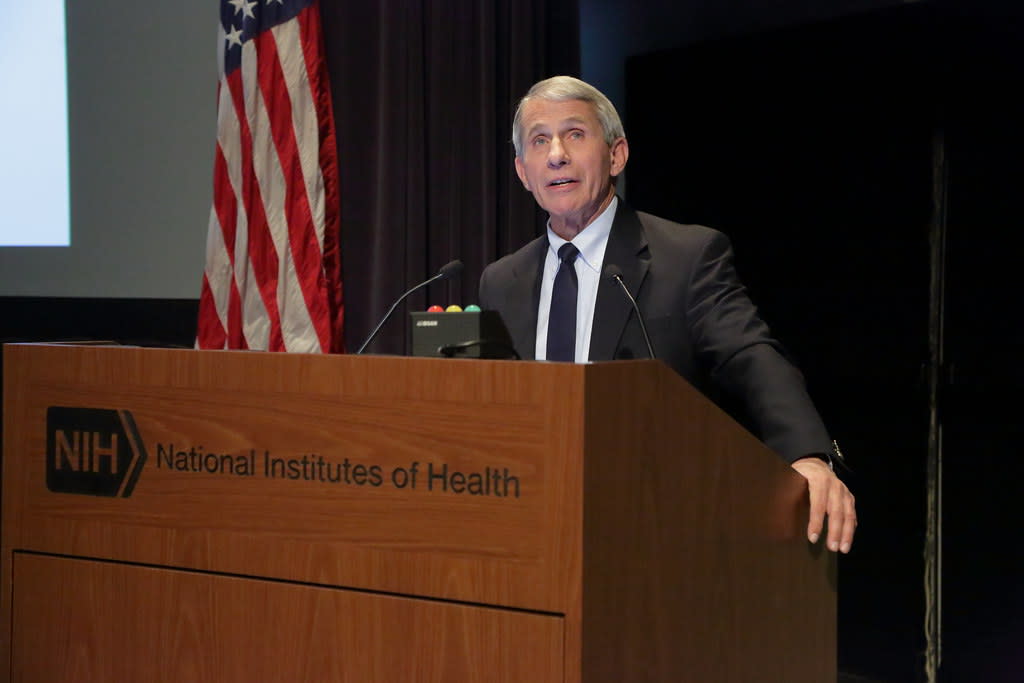 Communications between the United States’ chief medical advisor Anthony Fauci and health professionals, businessmen, politicians and members of the public have been obtained by Buzzfeed in a Freedom of Information Act (FOI) lawsuit.

The emails, dating from January to June 2020, span over 3000 pages and provide insight into Fauci’s initial handling of the COVID-19 pandemic. The communications also reveal information about China’s role in the virus and raise questions of whether the pandemic originated naturally.

The communications exhibit Fauci, the director of the US National Institute of Allergy and Infectious Diseases, interacting with figures including Facebook founder Mark Zuckerberg who offered to host a COVID-19 “information hub” on his social media website and provide resources to accelerate vaccine testing. In a similar email, actress Morgan Fairchild offered the services of her Twitter account in “helping in any way to get good information out to the public.” 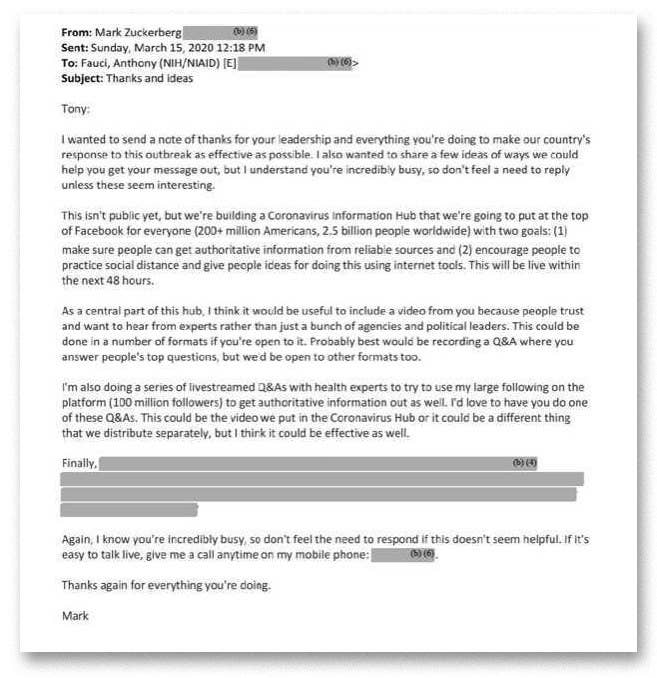 Notably, an email dated February 5th, 2020, implies that Fauci retained an anti-mask sentiment at the beginning of the pandemic. The chief medical advisor, replying to a woman named Sylvia Burwell, said:

“Sylvia … masks are really for infected people to prevent them from spreading (sic) infection to people who are not infected rather than protecting uninfected people from acquiring infection. The typical mask you buy in the drug store is not really effective in keeping out the virus, which is small enough to pass through the material.” 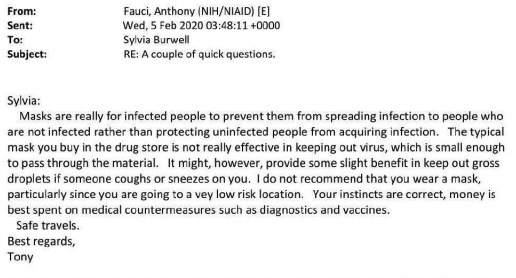 Fauci’s email was at odds with his recommendation on April 2nd for the general public to wear “some type of facial covering” to prevent the spread of coronavirus between persons in close proximity. On May 18th, Fauci spoke with George Stephanopoulos of ABC’s Good Morning America, who asked how his mask-wearing practices had changed.

“Well, you know, George, I’m obviously careful because, I mean, I’m a physician and a health care provider. I am now much more comfortable with people seeing me indoors without a mask. I mean, before the CDC made the recommendation change, I didn’t want to look like I was giving mixed signals, but being a fully vaccinated person, the chances of my getting infected in an indoor setting is extremely low, and that’s the reason why in indoor settings now I feel comfortable about not wearing a mask because I’m fully vaccinated.”

Fauci’s response directly contradicted his testimony to Senator Rand Paul during March 18th’s congressional hearing. Paul had accused the immunologist of practising “political theatre” by “parad[ing] around in two masks for show” despite him having “virtually 0 percent chance of getting [the virus]” - an accusation Fauci affirmed he “totally disagree[d] with.”

The emails also revealed Fauci’s acknowledgement of the recommendations by scientists to treat COVID-19 with the drugs Alvesco and Hydroxychloroquine. Writing to Fauci, Erik Nilsen, a physician working for the bioelectronic medicine firm BioSignal Technologies, revealed that frontline medical professionals in China, Korea and Japan had found the drug Alvesco to be “an effective treatment for late-stage COVID-19 patients.”

“Some patients on ventilators who were approaching death have fully recovered after treatment with ciclesonide [Alvesco]; ciclesonide has much smaller particles than other corticosteroids so it reaches deeper into lungs and alveolus. Also, the treatment seems to be a potent suppressor of virus replication. Recovered patients have tested negative shortly after the treatment. Of course, data is limited so can't be sure the treatment is effective. However, because Alvesco has been shown to be safe for infant - 100+-year-old patients, I'm ok with my family and I having it for emergency use.”

In a similar email, doctors Paul and Karyl Stanton cited Hydroxychloroquine as a “very good drug to use for the treatment of high-risk patients infected with COVID-19” after finding Chinese studies which said the drug had a “very potent activity against COVID-19 infection and pneumonia.” On May 1st, 2020, Fauci told Gabriel Stephens that there were still “open questions on the pathogenesis of COVID-19” and that the government would “soon know whether hydroxychloroquine has any beneficial effects.” However, later that month, the chief medical advisor revealed to CNN’s Jim Sciutto that the scientific data showed a “lack of efficacy” in regards to the treatment of COVID-19 with Hydroxychloroquine.

Perhaps the most significant point of contention in Fauci’s email dump was the assertion of COVID-19’s contrived origins. In an exclusive interview on May 5th, 2020, with National Geographic, Fauci shot down the averment that COVID-19 was “made in the lab in China or accidentally released from a lab in China.”

“If you look at the evolution of the virus in bats, and what's out there now is very, very strongly leaning toward this [virus] could not have been artificially or deliberately manipulated - the way the mutations have naturally evolved. A number of very qualified evolutionary biologists have said that everything about the stepwise evolution over time strongly indicates that it evolved in nature and then jumped species.”

However, an email sent by Professor Kristian G. Andersen of the Department of Integrative Structural and Computational Biology at the Scripps Research Institute, dated January 31, 2020, warned that the virus had “unusual features” and looked like it may have “potentially” been “engineered.” It was a message mirrored by that of independent medical researcher Adam Gaertner, who called COVID-19 a “bioweapon” and forwarded the virus’ formula to Fauci. 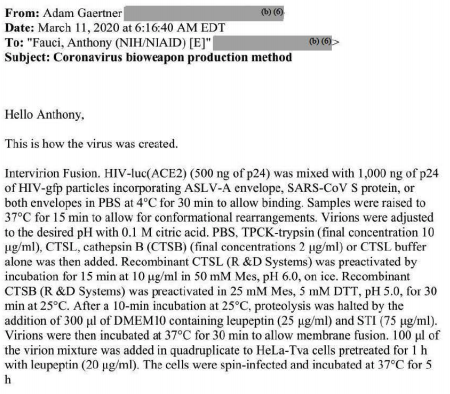 In February, Dr Micheal Jacobs, an associate professor of dermatology at the Cornell medical school, and Alexander Tarakhovsky, a virologist and professor at Rockefeller University, informed the chief medical advisor that there was a “possibility that the virus was released from a lab in Wuhan.”

“We think that the virus might be complexed with another organism, such as a yeast or fungus, to make it more sticky. We would like to discuss this with you further. We feel that immediate action must be taken by United States scientists to try to neutralise this threat.”

Dr Andersen’s team would go on to publish a paper in Nature on March 17th, 2020, that dispelled the possibility that COVID-19 originated in a lab. The paper concluded that there were “two scenarios that can plausibly explain the origin of SARS-CoV-2,” namely “natural selection in an animal host before zoonotic transfer; and natural selection in humans following zoonotic transfer.”

“Although the evidence shows that SARS-CoV-2 is not a purposefully manipulated virus, it is currently impossible to prove or disprove the other theories of its origin described here. However, since we observed all notable SARS-CoV-2 features, including the optimized RBD and polybasic cleavage site, in related coronaviruses in nature, we do not believe that any type of laboratory-based scenario is plausible.”

Later, Fauci was thanked in a heavily censored email by World Health Organisation (WHO) official Peter Daszak for pushing back against the claims that COVID-19 had leaked from a lab. 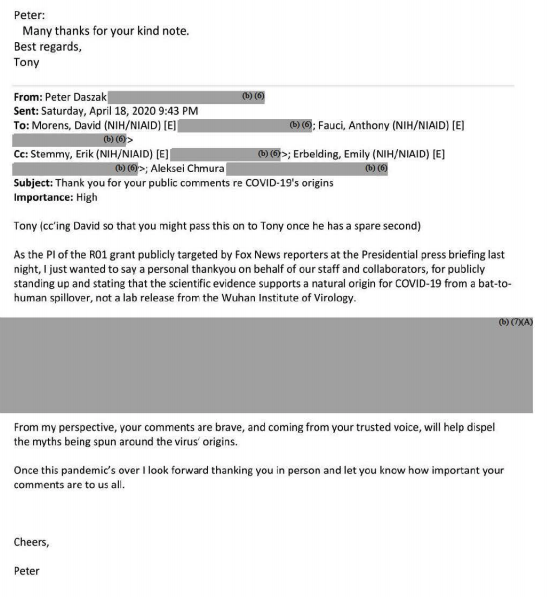 Daszak remained a vehement denier of the Wuhan lab-leak theory even before the WHO’s investigation in Wuhan in February 2021 - an investigation he travelled to Wuhan to be part of - and continuously refuted claims that COVID-19 was the product of an experiment. Speaking about his involvement in the Wuhan investigation, Daszak asserted:

“It is an honour to be part of this team. There hasn’t been a pandemic on this scale since the 1918 flu, and we’re still close enough to the origin to really find out more details about where it has come from.”

The British zoologist and disease ecology expert is the president of EcoHealth Alliance, a nonprofit organisation “focused on research that aims to prevent pandemics.” According to Nature, Daszak spent more than a decade studying coronaviruses and is a long time collaborator of Shi Zhengli, the director of the Wuhan Institute of Virology (WIV). The WIV is the Chinese lab enthralled in the COVID-19 controversy, which, by early 2020, had received $3.4 million in National Institute of Health grants from Daszak's EcoHealth Alliance. In December 2019, he spoke with the This Week In Virology podcast about the benefits of “manipulating coronaviruses.”

“Coronaviruses are pretty good. You can manipulate them in the lab pretty easily. The spiked proteins drive a lot about what happens. You can get the sequence, you can build the protein, we work with Ralph Baric at UNC to do this, insert into the backbone of another virus and do some work in a lab.”

Angela Rasmussen, a virologist at Georgetown University, told Nature that Daszak’s ties to the Wuhan lab and his placement on the WHO investigation team would constitute a conflict of interest. In February 2020, Daszak wrote an op-ed for the New York Times in which he alleged that he had warned WHO experts in 2018 about a pandemic “caused by an unknown, novel pathogen that hadn't yet entered the human population.” Shortly after, it was revealed that the Trump administration had abruptly frozen the funding for his research after President Donald Trump’s claims that the virus had “escaped from a Chinese laboratory supported by an NIH grant.”

On May 22, 2021, Fauci admitted that the NIH had earmarked $600,000 for the Wuhan lab over five years to study whether bat coronaviruses could be transmitted to humans. As reported by the New York Post, Fauci told a House Appropriations subcommittee that the money was funnelled to the Chinese lab through Daszak’s organisation with the aim of funding “a modest collaboration with very respectable Chinese scientists.” Fauci “categorically” denied that the money went toward so-called “gain of function” research - the action of “taking a virus that could infect humans and making it either more transmissible and/or pathogenic for humans.” Nonetheless, the issue of gain of function research appeared in an email between the National Institute of Allergy and Infectious Diseases Deputy Director Hugh Auchincloss and Fauci on February 1st, 2020. 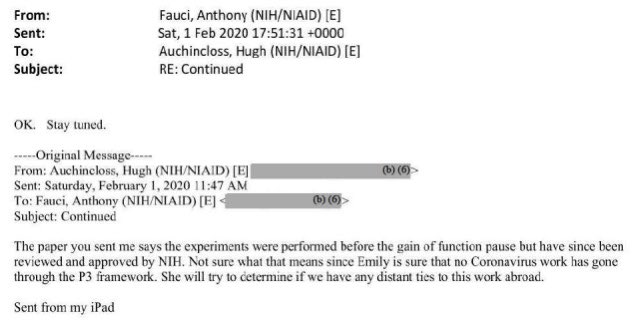 The revelations concerning Daszak have urged many critics to suspect a coverup in the virus’s origin.

As reported by the Daily Mail last week, British Professor Angus Dalgleish and Norwegian scientist Dr Birger Sørensen will soon release a study proposing that “SARS-Coronavirus-2 has no credible natural ancestor” and that it is “beyond reasonable doubt” that the virus was created through “laboratory manipulation.” Speaking on NBC News’ ‘Meet the Press’ on Sunday, Peter Hotez, a professor of molecular virology and microbiology at Baylor College of Medicine, called for a second thorough and transparent investigation to determine whether the virus leaked from a lab or came from animals.

“There's going to be COVID-26 and COVID-32 unless we fully understand the origins of COVID-19. What we need to do is we need to do an outbreak investigation. We need a team of scientists, of epidemiologists, virologists, bat ecologists in Hubei province for a six-month to year-long period and fully unravel the origins of COVID-19. That includes collecting virus samples and blood samples from domestic livestock, bats, from laboratory animals. It means doing the same for people living in the endemic area.”