An unnamed civil servant working for a governmental department (which they requested that we keep unspecified) has provided Lotuseaters.com with a document from a mandatory “anti-racism” training session for the civil service. The course is titled “Tackling Institutional Racism”. On the 16th of December 2020, the Conservative government announced that Unconscious Bias Training and Diversity Training was to cease for civil servants and they encouraged other parts of the public sector to follow suit.

The Conservative government’s decision to discontinue the Unconscious Bias and Diversity Training has been previously covered by Lotuseaters.com, both on a two-part podcast and in writing. In my analysis of this decision, I presented the wealth of existing psychological research showing these forms of training as ineffective in their aims and sometimes even counter-productive.

In short, such training is ineffective in its aims. In fact, compulsory Diversity Training can have a backfire effect, in which, rather than combating prejudices, the training further reinforces them. To avoid this backfire effect, attendance would need to be voluntary. However, if participation is voluntary, presumably only those already sympathetic to the teachings will attend. Even the research which seemingly supports the training suggests that, for the small benefits provided, if at all, training needs to be repeatedly followed up on for it to have any effect at all. This ultimately means that Diversity Training could become a large drain of both time and money for any organisation involved - without any guarantee that there would be any observable effect on those who take part, alongside the risk of a backfire effect.

Unconscious Bias Training (UBT) can also have a backfire effect. However, UBT does not even work at a conceptual level. There is a small body of evidence to suggest that the primary unconscious bias test (the Implicit Association - IAT) is effective at raising awareness of certain issues if participants are debriefed and sessions are followed up on. However, awareness is one of the cognitive processes associated with consciousness, not the unconscious. Awareness is the dividing line between what is conscious and what is not, as what is beyond our awareness is the domain of the unconscious. The entire premise of this training is that it combats unconscious bias, which, by definition is beyond our awareness. Therefore, using evidence of ‘awareness raising’ to suggest an individual's unconscious bias has changed is conceptually inconsistent. This may explain why this form of training does not manifest in any actual observable behaviour change.

This new form of training, “Tackling Institutional Racism”, originates from a private company named Passaré Consultancy. The Consultancy was formed in 2004 by psychologist Martyn Stewart, who appears to be the sole person involved in the company. The purpose of the company is to:

“combine behavioural research and strategies with the latest cognitive neuroscience discoveries of how the brain works to improve the health, well-being and performance of the everyday people who make up our schools, organisations and social relationships.”

Martyn Stewart appears to be involved in giving talks and orchestrating workshops at conferences and for corporations, individuals, and in educational settings. He stylises himself as a motivational speaker and self-help guru, making repeated mention of his “recognition as a chartered psychologist”. To receive this title one must have achieved at least a 2:2 on an undergraduate honours degree, have completed postgraduate training, have experience of teaching psychology, and have completed psychological research to a doctoral level.

Stewart is also involved in “The Fear Project” which is a “programme designed to help you positively and productively re-engineer your mind to reduce the mental discomfort and confusion you experience every day.” Publicly available information about the programme states it will lead to “recalibrated thinking and behaviour.” In an interview where he discusses his motivation for forming his companies, Stewart states “I just want to make money.” 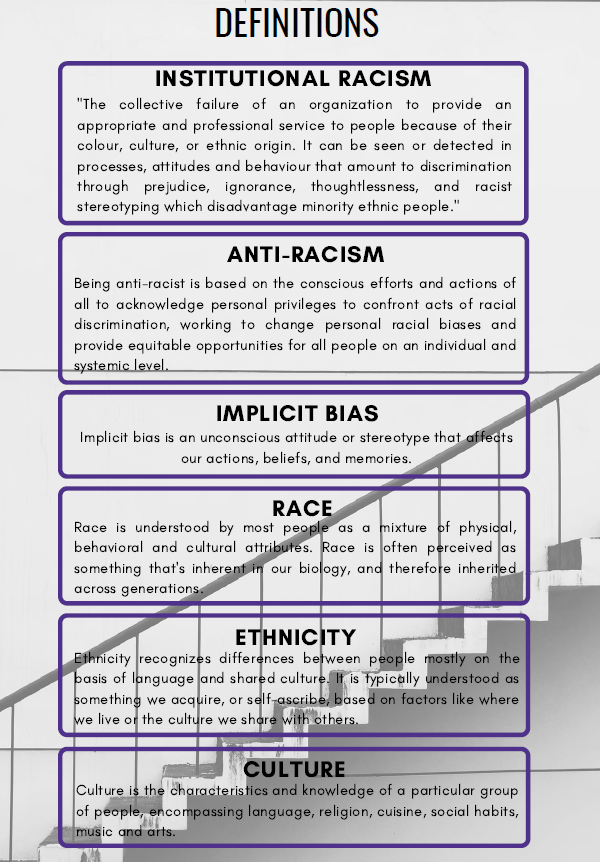 The document accompanying the training provides definitions of several controversial terms. One of the terms featured is “Institutional Racism”, the existence of which was disputed in a recent UK government-commissioned report on race and ethnic disparities, which concluded that factors such as family structure, class, socio-economic background, geography, culture, and religion having a "more significant impact on life chances than the existence of racism." The term “Anti-Racism”, also featured, is associated with Critical Race Theory, of which Conservative Equalities Minister Kemi Badenoch has been critical of, stating:

“[It is] an ideology that sees my blackness as victimhood and their whiteness as oppression.”

There is also mention of “implicit bias”, which is another term used interchangeably with unconscious bias. 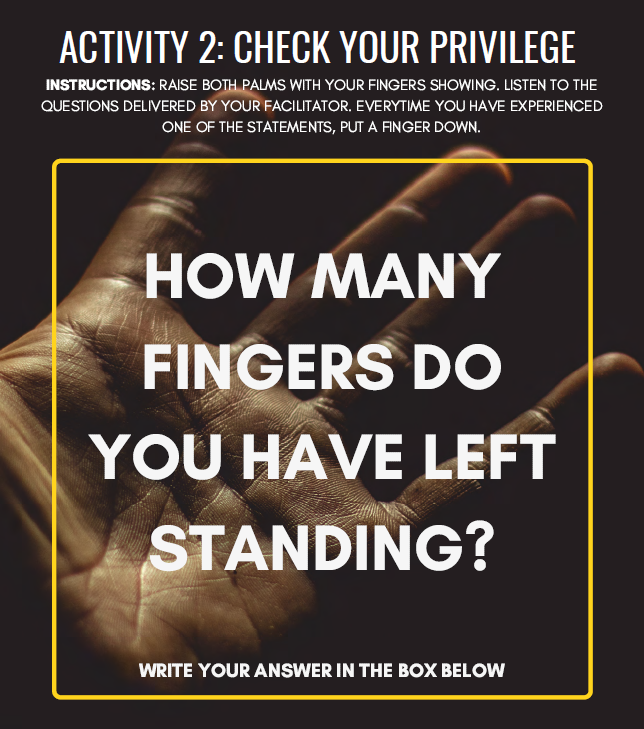 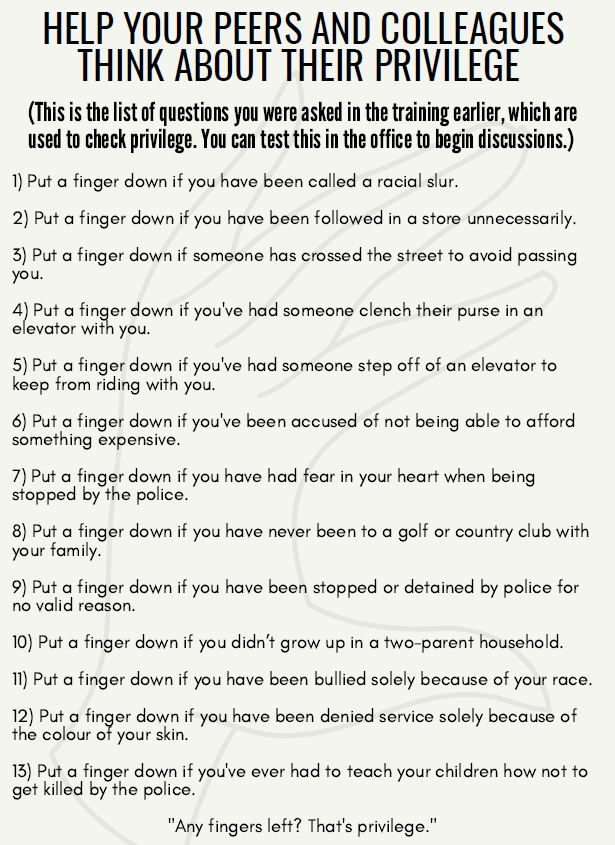 Participants are instructed to “check their privilege” by being asked questions about their personal experiences. 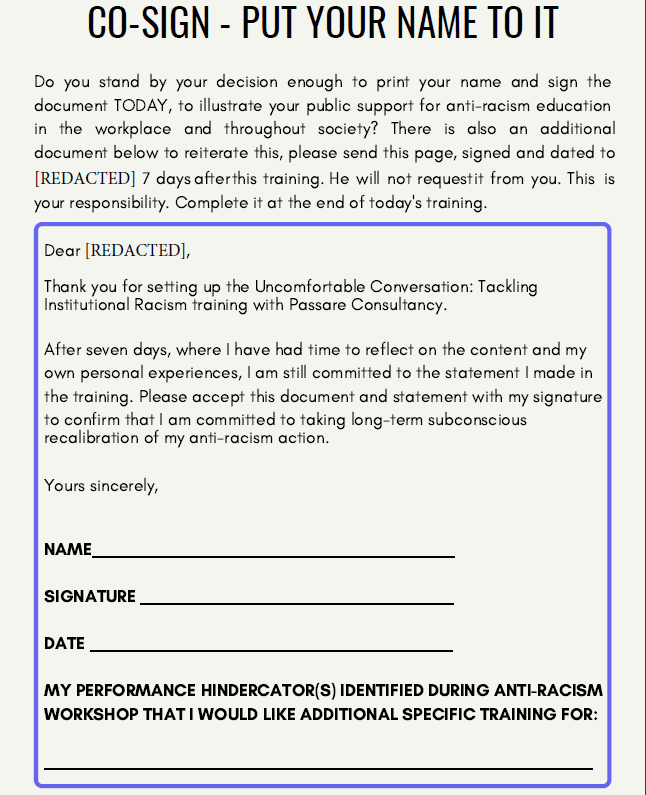 The training compels the participants to sign a pledge thanking the person who made them attend the course and a pledge to uphold the principles of ‘anti-racism’. It also instructs participants to write down what follow-up training they would need based on a previous score in the training. 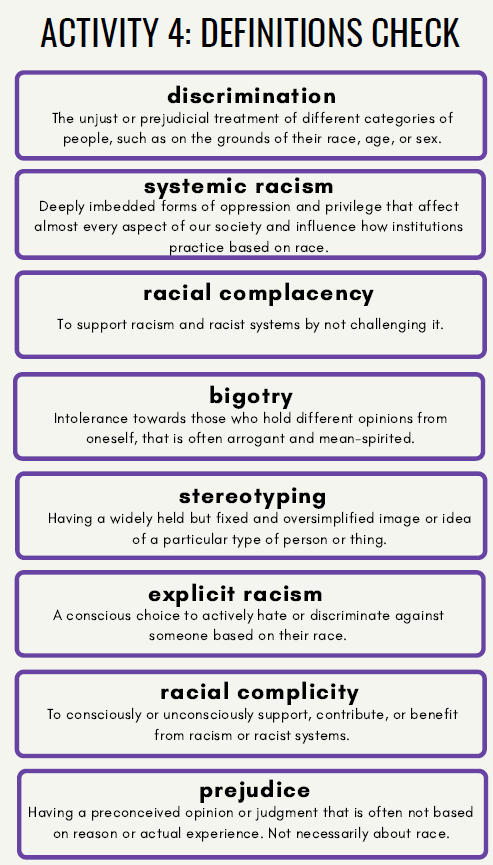 Some further definitions. It is worth noting that the definition of “systemic racism” suggests that it affects “almost every aspect” of society and how institutions run, which is consistent with the core claims of the doctrine of Critical Race Theory. 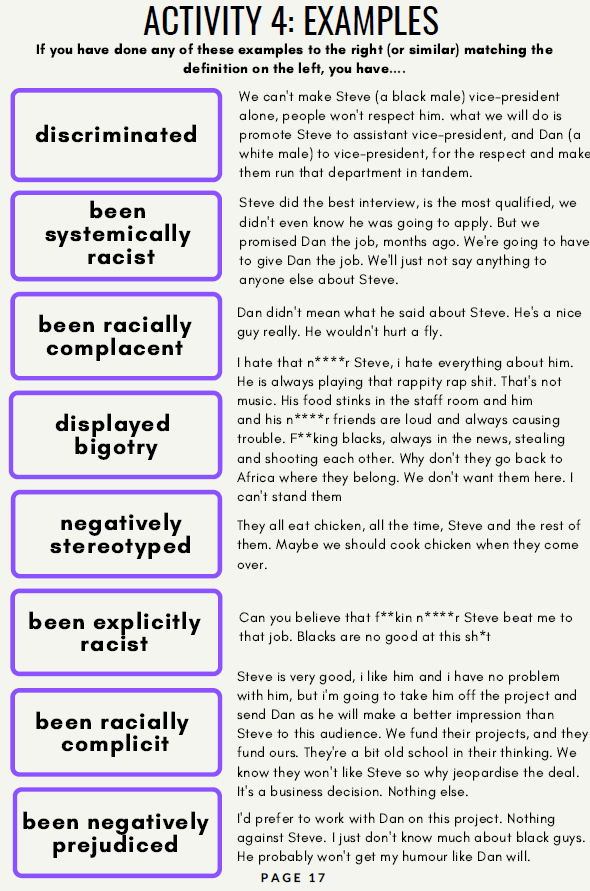 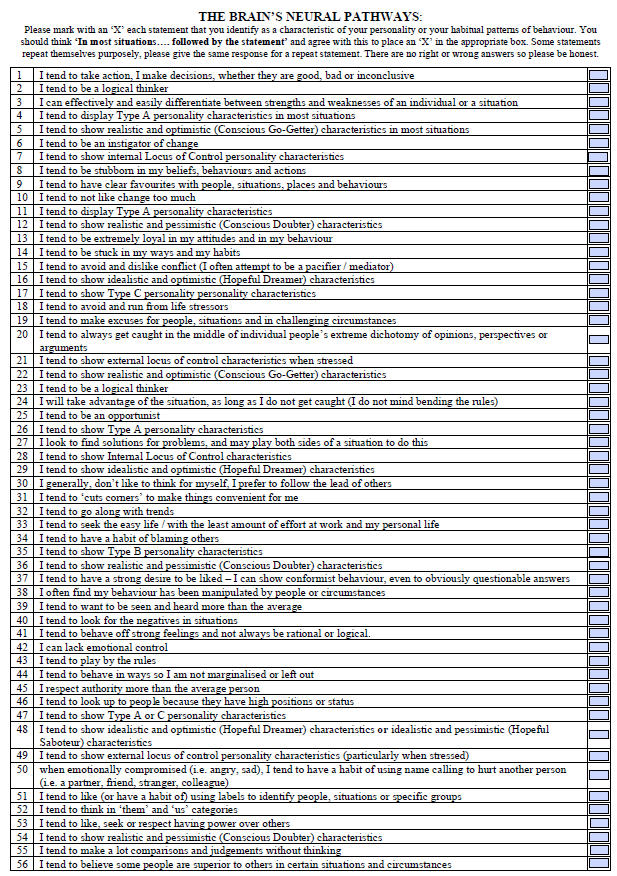 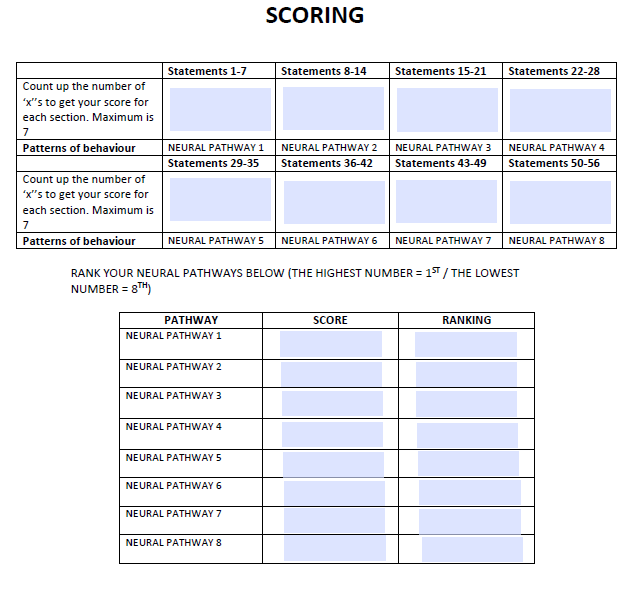 The title “The Brain’s Neural Pathways” is misleading here. A neural pathway is a connection between individual neurons which enables a signal to be sent from one area of the brain to another. This has nothing to do with the contents of the rest of the page. The checklist presents itself as a valid psychometric test, but such tests are ordinarily created using considerable and repeated statistical testing. Instead, this one appears to be entirely contrived by Martyn Stewart. Some of the statements appear to be borrowed from other pre-existing tests, but those cannot be considered valid when taken out of context. 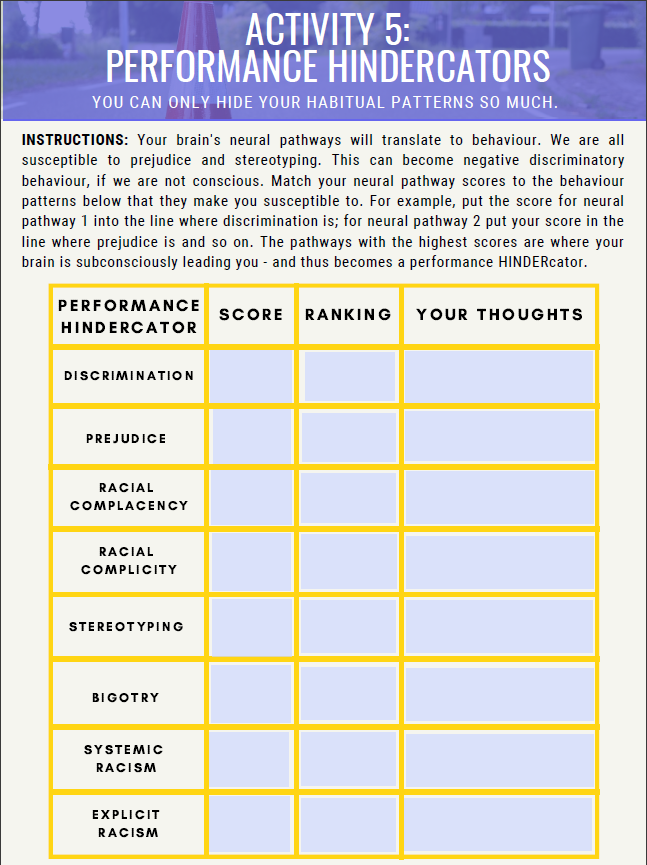 The participants in the training are then to fill in a “performance hindercators” “score” for themselves based on their results. This could be potentially damaging as it may lead to people getting the impression that they have been categorically labelled, as “prejudiced”, for example, based on a checklist that appears to be unsupported by the usual rigorous statistical testing used in the development of most psychometric tests. 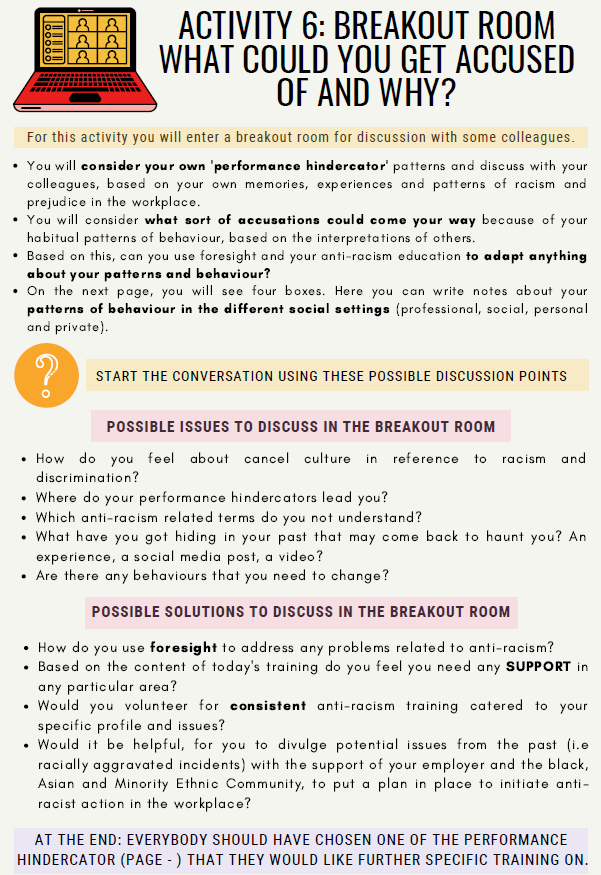 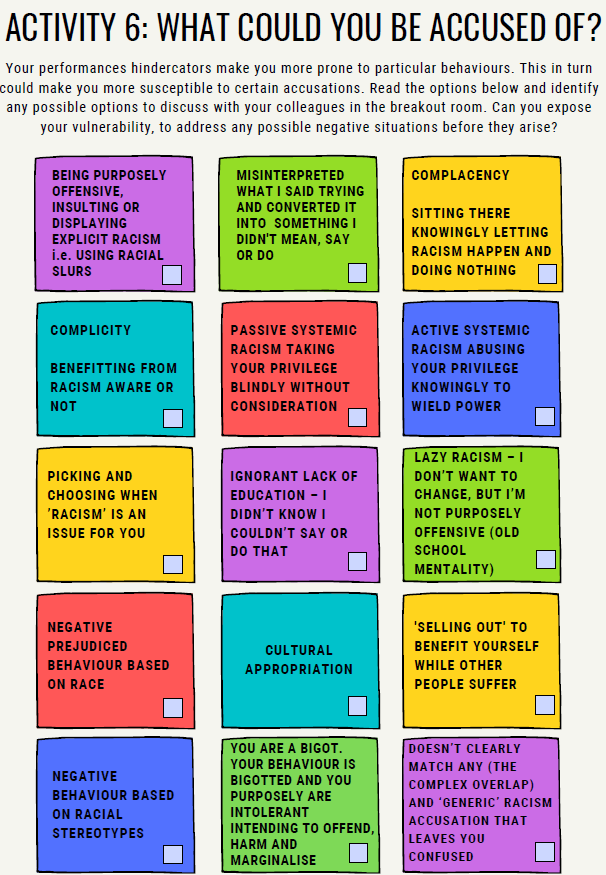 Based on the previously established scores, they suggest that participants should discuss their supposed deficiencies with their colleagues. They provide potential questions and solutions, with repeated reference to “anti-racism”. 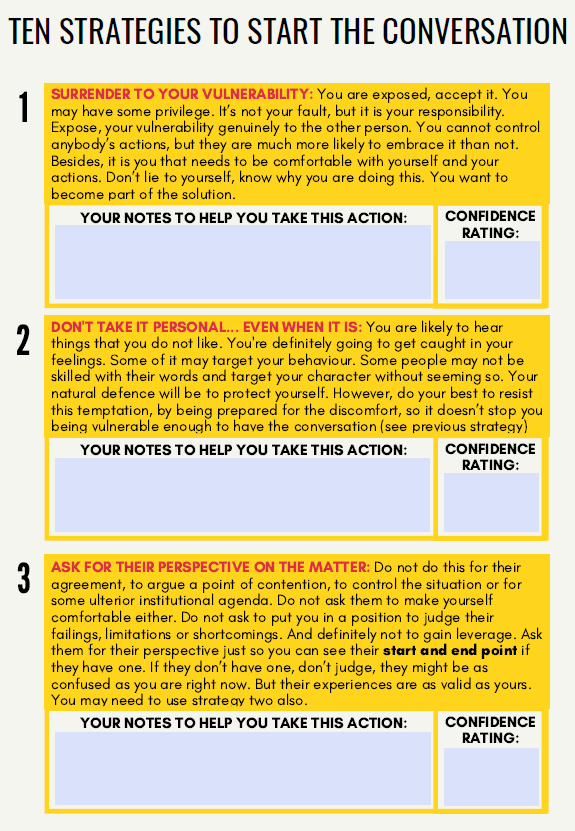 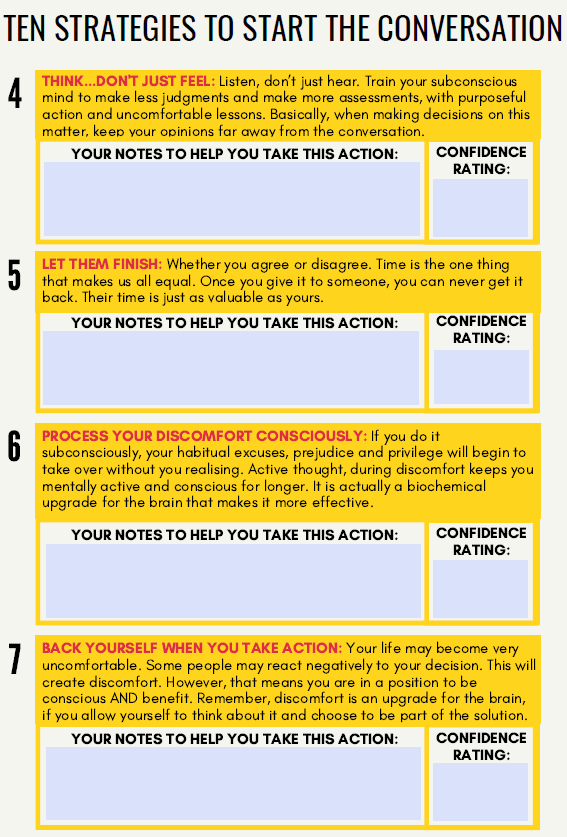 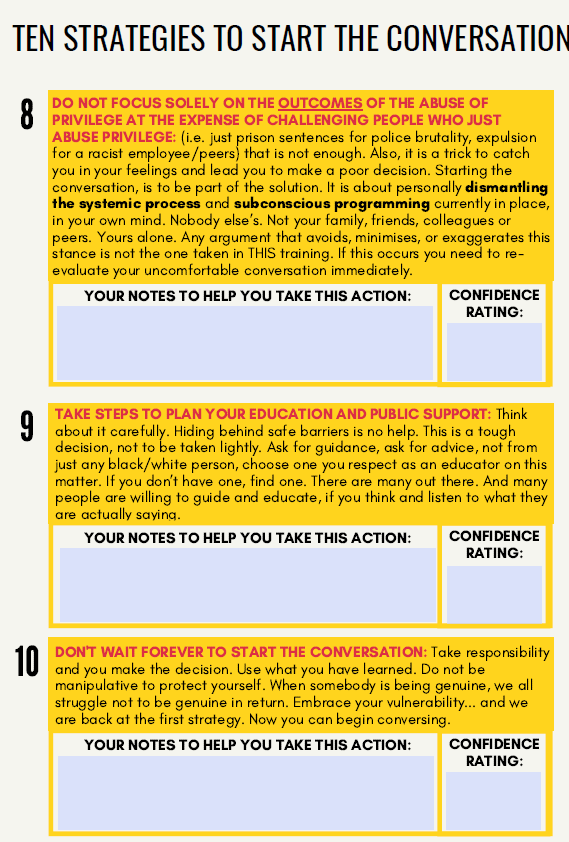 These ten points provide strategies to start conversations about privilege with others. 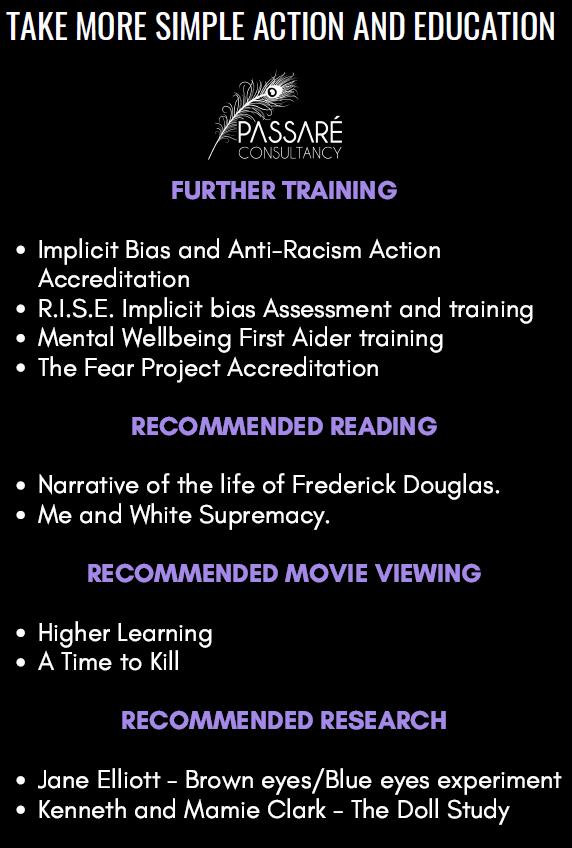 The training ends with suggestions for further study.