Border clashes between Kyrgyzstan and Tajikistan have resulted in at least 49 deaths, 132 injuries, and thousands displaced over the past days. Since then, the two governments have agreed to a ceasefire and pulled back. Although the relations between the two countries often grow into conflicts, the recent events have been by far the most serious in many years. The partitioned Ferghana Valley area, formerly part of the USSR, is a frequent site of disputes, with the presence of many exclaves and unclear borders.

The clashes started on Wednesday, March 28th, when Tajik labourers reportedly installed a CCTV surveillance camera on a utility pole at a water supply facility near the Kyrgyz village of Ak-Sai. The village lies on a road corridor providing the only road access between Tajikistan and its Vorukh exclave. Although Ak-Sai is Kyrgyz, the borders around the village and the Tajik exclave are imprecisely demarcated.

According to Kyrgyz authorities, the Tajik works spurred the conflict as the water facility belongs to Kyrgyzstan - which opposed its monitoring by foreign actors. The disagreement grew into a scuffle as stones began to be thrown by “large crowds of residents from both sides.” First shots were supposed to be fired in the early morning on Thursday at a Tajik military outpost.

According to Tajik authorities, the conflict began as an “act of provocation by Kyrgyz officials,” whose goal was supposed to be to take over the water facility and the adjacent area, which is supposed to belong to Tajikistan. Gunfire was allegedly initiated by Kyrgyzstan later on Tuesday morning.

Reuters reported that the conflict began with villagers from the two countries throwing stones, who were joined by their respective border guards, which led to an escalation including lethal violence by guns and mortars (an attack helicopter might have been involved, one side claims). 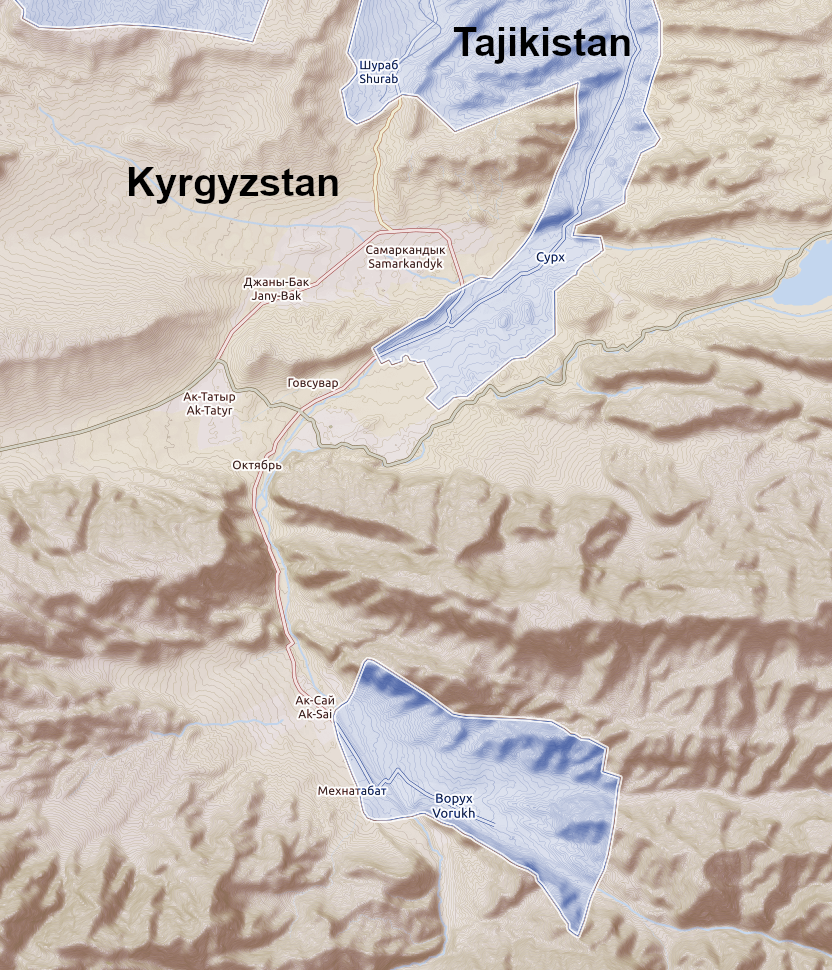 By Saturday, May 1st, the clashes were reported to have claimed 49 lives. 34 of those were on the Kyrgyz side, only three of which were non-civilians. On the Tajik side, 15 people were reported dead, including 8 civilians.

Alongside the deaths, more than a hundred injured are also reported. Saturday’s numbers identify 132 wounded, while a report from Sunday claims that up to 178 people have been injured. In addition, over 30,000 people have been evacuated, most of which are reported to be children, from the conflict zone as well as border areas within the region. More than a hundred properties have been burned, including border posts, schools, and many houses and shops.

The local video coverage of the conflict appears to be showing both armed civilians and what appears to be members of the military involved in the violence. In a video from a Kyrgyz Twitter account, a burning house is seen along with non-uniformed individuals carrying rifles. Tajiks are accused of burning Kyrgyz villages. In other videos, armed militants are seen running through a village with a backdrop of heavy gunfire.

Although a ceasefire was announced to take effect on Thursday evening, some shooting was reported to continue into the night. In a meeting on Saturday, the heads of national security of both Tajikistan and Kyrgyzstan agreed to withdraw their troops and bring the fighting to an end. By Monday, May 3rd, both countries have completed the withdrawal process and left the border areas. The conflict zones are currently “stable” and no further violence has been reported. Kyrgyz interior ministry has already launched 11 criminal probes into the events of last week.

The dispute has been the most intense and has resulted in the highest toll in years between the two countries. In the Ferghana Valley area, the land has been divided between three sovereign states after the fall of the USSR - Kyrgyzstan, Tajikistan, and Uzbekistan - broadly along ethnic lines. This has resulted in heavy fragmentation, sometimes described as a ‘checkerboard’ border, which features many enclaves and exclaves. In such a situation, conflicts have frequently arisen with regard to access provision to villages and towns ‘stranded’ in foreign territory. In addition, large sections of the borders have never been precisely demarcated, resulting in competing claims over certain territories, including the water facility crucial in the recent dispute.