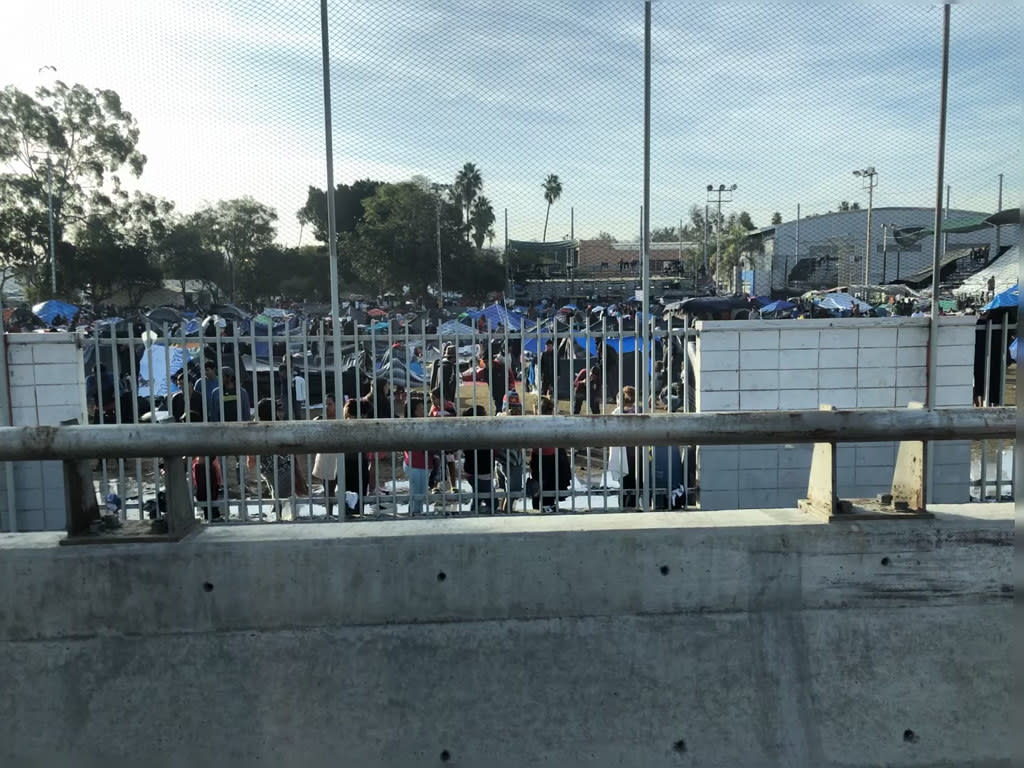 Undercover footage from inside a US Customs and Border Protection temporary overflow facility in Donna, Texas, has revealed the squalid and cramped conditions that migrants are subjected to. Additionally, a leaked Department of Homeland Security report indicates that a massive influx of migrants will arrive on the border from Central America in the coming months.

Footage and pictures from inside a facility at Donna, Texas, released by Axios.com and Project Veritas show migrant juveniles living in cramped ‘pods’, laying on the floor wrapped in foil blankets. The images highlight the Biden administration’s struggle to mitigate the influx of illegal immigrants attempting to cross the border.

Democrat Representative Henry Cuellar provided images to Axios.com showing the conditions at the Donna facility. Cuellar, who recently visited a shelter for children, did not tour the Donna facility or take the photos himself, stating that the photos were taken over the weekend by an inside source. According to Rep. Cuellar, migrants are separated into eight ‘pods’, each with a 260-person capacity. As of Sunday, however, one pod held more than 400 unaccompanied male minors, with the footage released by Project Veritas supporting this.

Media coverage at the temporary border facilities is generally restricted. At a recent White House press conference, the Press Secretary, Jen Psaki, was asked why images from the facilities have not been released. The Press Secretary dodged the question, saying “we remain committed to sharing with all of you data on the number of kids crossing ... we remain committed to transparency.”

The photos and footage released by Axios and Project Veritas show migrant males in cramped conditions, many laying on the floor unsupported with foil blankets for warmth. At the Donna facility, 600 juvenile males aged 7-17 are currently housed at one time, separated across the ‘pods’ by age and physical size. According to Project Veritas, 50 individuals have tested positive for COVID-19, and multiple sexual assaults have occurred. Physical assaults and medical emergencies at the facilities have been recorded daily in recent months.

Rep. Cuellar described the conditions as "terrible” and said the migrants need to be moved more rapidly into the care of the Department of Health and Human Services (DHS). He continued to state that Border Patrol agents are "doing the best they can under the circumstances" but are "not equipped to care for kids" and "need help from the administration.”

"We have to stop kids and families from making the dangerous trek across Mexico to come to the United States. We have to work with Mexico and Central American countries to have them apply for asylum in their countries. I have said repeatedly from the very outset a Border Patrol station is no place for a child, that is why we are working around the clock to move these children out of the Border Patrol facilities into the care and custody of the Department of Health and Human Services that shelters them.”

Last week, Arizona Pinal Country Sheriff Mark Lamb described the situation at the border as the “Wild West”, saying it was reminiscent of the years of the Obama administration. In February, southern border migrant encounters were up 174% year-on-year. In February, 29,792 unaccompanied children were detained at the border - five times more than in January - of whom 2,942 were under the age of 12. As of Saturday, there were 10,000 migrants in Customs and Border Protection (CBP) custody overall and nearly half were unaccompanied minors, according to government data provided to Axios. According to Axios, government facilities are at capacity under coronavirus protocols, and the Rio Grande Valley sector has far exceeded even its non-pandemic limits.

Press Secretary Jen Psaki has blamed the Trump administration for the crisis, stating that "the last administration left us a dismantled and unworkable system and, like any other problem, we are going to do all we can to solve it.” In a leaked tape provided to Project Veritas, DHS Secretary Mayorkas maintained that “the new administration made a decision not to expel unaccompanied children, and we are addressing a significant increase in the encounters with unaccompanied children in between the ports of entry.” On MSNBC, he compared the administration's actions to those of the Trump administration, stating "we are not expelling children, girls, 5, 7, 9 years old back into the desert of Mexico, back into the hands of traffickers.”

Republicans have accused Biden of creating powerful “pull” factors for Mexican migrants. In February, Biden terminated Trump’s “Remain in Mexico” policy which required asylum seekers to stay in Mexico while their applications were processed. Biden also stopped the construction of Trump’s notorious border wall, issuing an order affirming the 2012 Deferred Action for Childhood Arrivals.  Biden had criticised Trump for separating children from their parents and the holding facilities were a cause of contention in the 2020 presidential election. In August 2019, Biden said “Close them down!” and “We don’t need them,” when discussing the border detention facilities.

A leaked DHS memorandum released by Project Veritas warned of a central-American “migrant caravan” heading towards the United States on the 30th of March. According to the memorandum, prepared by CBP at the Office of Intelligence:

“Potential caravan participants are using social media to continue to promote a Central America based migrant caravan, to depart San Pedro Sula, Honduras, on 30 March, and transit Mexico en route to the US ... In the days leading up to March 30, CBP personnel in the region will work closely with and contain constant communication with CBP partners including ICE, as well as local security and immigration agencies. As per previous caravans, these efforts yield real-time updates concerning numbers, routes and make-up of the caravan, as well as awareness of local government and law enforcement engagement.”

"Trafficking is a multibillion-dollar industry, a lot of these vulnerable populations use their life savings. Some are essentially indentured servants and they're working off this debt for a long period of time. In other cases, some of these migrants are asked to transport narcotics or some form of crime to work off a different part of their debt."