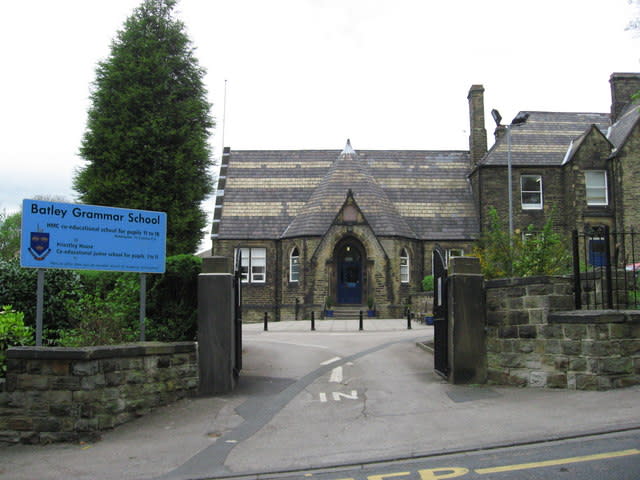 A teacher has been suspended from a West Yorkshire school for allegedly showing a Charlie Hebdo cartoon depicting the Prophet Mohammad, sparking a protest at the school’s gates which had to be broken up by police.

A demonstration organised on social media began at the gates of Batley Grammar school in West Yorkshire at 7:30 am on Thursday, with protestors rallying against a teacher’s usage of a caricature of the Prophet Mohammad, taken from French satirical magazine Charlie Hebdo, in a religious studies lesson on the 22nd of March.

The usage of the cartoon sparked outrage among some members of the Muslim community, with one message on Facebook stating:

“it is imperative that all of us turn up to demand the resignation of this teacher as an absolute minimum and fulfil our duty of defending the honour of RasoolAllah.”

“A teacher deliberately showed derogatory caricatures of our beloved Prophet Muhammad and told the students that it was his right to show this! He failed to apologise or accept any wrongdoing when challenged by parents. It is imperative that *ALL OF US* turn up to demand the resignation of this teacher as an absolute minimum."

Batley Grammar school attempted to diffuse the situation earlier this week, stating in a letter:

“The school would like to thank the parents who contacted us on Monday, March 22, highlighting concerns with a resource used in an RS lesson that day. Upon investigation, it was clear that the resource used in the lesson was completely inappropriate and had the capacity to cause great offence to members of our school community for which we would like to offer a sincere and full apology. As an additional precaution, we will undertake a formal review of the RS curriculum to ensure no other resource or statement is inappropriate and take appropriate action as needed.”

Parents were sent a text message on Thursday morning advising children to stay at home “due to the disturbance outside of school,” asking parents to “please keep [children] at home.” Yorkshire Live reported that police had cordoned off the scene and guarded every entrance of the school as a crowd of a hundred people, chanting “Allahu Akbar” as well as other phrases, gathered outside the gates. Imam Mohammed Amin Pandor, addressing the crowd at the school gates following a meeting with the school's headmaster, asserted that “what happened here” is “disgusting."

Later, a statement obtained by Sky News, signed by the headteacher and passed through the school gates to the protesters, stated:

“The school would like to thank the parents who contacted us on Monday 22 March highlighting concerns with a resource used in an RS lesson that day. Upon investigation, it was clear that the resource used in the lesson was completely inappropriate and had the capacity to cause great offence to members of our school community, for which we would like to offer a sincere and full apology."

The statement also noted that teaching would be “immediately withdrawn” from the course in question, and the school would conduct a review on how to move forward with the “support of all the communities represented in our school.”

It was then confirmed that the teacher who had shown the cartoon had been suspended. Imam Mohammed Amin Pandor stated:

“What has happened is totally unacceptable and we have made sure they are aware. The teacher has been suspended. They can't just sack him, they need to do their due process. We've asked for an investigation, an investigation to be independent. We are going to work with the school to make sure things like this don't happen."

Yunus Lunat, an executive member of the Indian Muslim Welfare Society in Batley, told Sky News that the teacher "went off script" and was trying to "provoke":

"They talk about freedom of expression, but I question what freedom of expression has to do with an RE lesson. You will never see an image of the prophet Mohammad in our mosque, in any mosque in the world. It's not acceptable, that gives you some sense of understating as to why these cartoons cause aggravation."

"Secondary schools have a duty to introduce pupils to contentious ideas and debates, as part of a process of teaching children how, rather than what, to think. Schools in the UK must not concede policy to angry mobs at the school gates or to so-called community leaders. The school’s censorious approach appears to be the exact opposite of the approach in France, where demands to sanitise classroom discussions by Islamist campaigners were resolutely rejected by the government, following the hideous murder of teacher Samuel Paty."

Later on Thursday afternoon, the Islamic charity Purpose of Life released a response to the usage of the Charlie Hebdo cartoon. The response names the teacher in question five times, labelling his actions as “hatred” and “sadistic terrorism” against Islam and Muslims “around the world.” The response also called for the teacher to be “permanently removed,” and said the school’s apology did “not go far enough.”