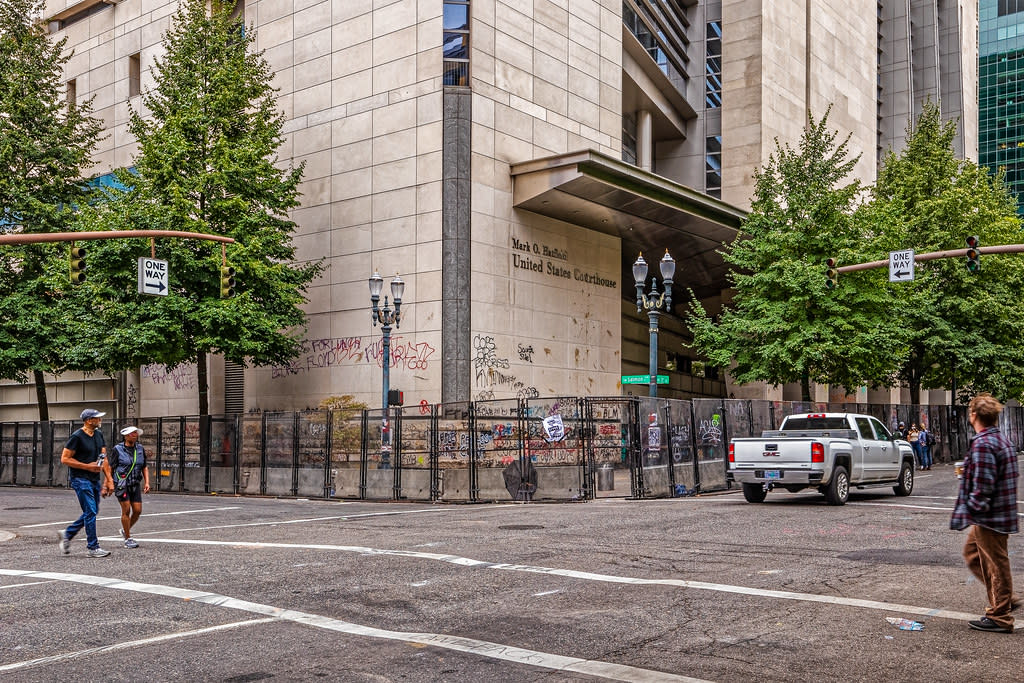 The security fence constructed to protect the Federal Courthouse in Portland, Oregon, was re-erected on Sunday following the detention of 100 people after three days of violent protests.

The Mark O. Hatfield U.S Courthouse in downtown Portland was targeted over the weekend as a continuation of the protests against the proposed Line 3 pipeline. The pipeline will replace an existing 282 miles of 34-inch pipeline with 330 miles of new 36-inch diameter pipe, transporting an average of 760,000 barrels of oil per day between Canada and Minnesota.

Protests continued over the weekend, resulting in eight courthouse windows being broken and the building left covered in graffiti. As reported by The Oregonian, graffiti left on the building included messages such as “Nazi’s work here”. U.S Attorney Scott Asphaug noted:

“As a first-generation American whose parents lived through the horrors of World War II, in England and Norway, you can’t say anything more offensive than alleging that the people who work inside that building, who I know and love, are Nazis”.

On Saturday, the Portland Police and Federal Security Services used the tactic of kettling to contain the protesters in a perimeter before detaining 100 people. Kettling, otherwise known as containment or corralling, is a controversial tactic used by police for controlling large crowds during demonstrations or protests. Police spokesperson Sgt. Kevin Allen said there was “reasonable suspicion” that everyone inside the kettle perimeter had “committed at least one criminal violation” as protesters smashed windows and blocked traffic. Sgt. Allen continued to say that “based on the size of the crowd” kettling was the “safest and least intrusive way to protect public safety and stop the criminal destruction.”

Thirteen of the 100 detainees were charged with crimes including interference with a peace officer, second-degree disorderly conduct, resisting arrest and unlawful possession of a firearm. The remainder of the detained had their identities and photographs taken before being released.